The Black Crowes Setlist at on 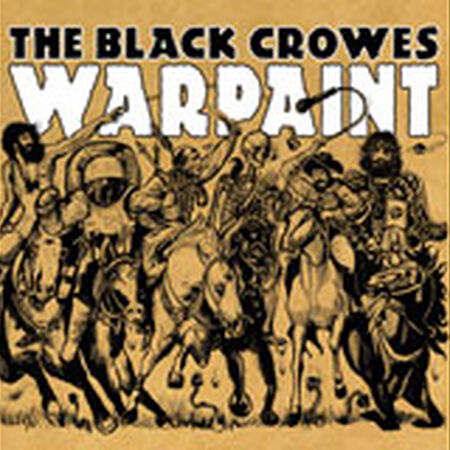 Anthony DeCurtis of RELIX Magazine hails Warpaint as “The group's most confident and instantly appealing album since the raw, raucous Shake Your Money Maker first brought the group national attention in 1990."

"I can only say that when I first listened to this album I had that same giddy, excited feeling I first had when I heard "Shake your Money Maker." These songs speak to the listener so profoundly. I think it's some of Chris' best songwriting and the band crafted these songs beautifully. There's alot of emotion in those words and in the music. To me it sounds like a rebirth of sorts. The band seems re-engergized and Luther and Adam undoubtedly are a big reason for that. They are playing with alot of joy and passion and it shows through on the new tour. I think this album will be one of those that music lovers look back on in years to come and consider an underground classic. -The End "

"I dig the album, although it could rock a little heavier. My favorite tunes are the title song, along with "Down the Line", "God's Got It", and "Josephine". Bottom line is this is one of the last true great "rock bands" around today and they never seem to miss finding the groove that's missing in so much of today's recycled music. Long Live the Black Crowes !!"

"Best BC'S recording ever with 3 Snakes & 1 charm same felling same laid back the Crowes at their best, hope to listen shows from 2008 tour soon"

"My overall feeling after numerous listens, I expected a little bit more, but I am also very demanding. This is still a fabulous album, that falls right in Line with Three snakes, and The Band. Compared to other new albums recently released (moe and Widespread panic)…it is absolutely amazing. As for sequence, I would’ve put another scorching tune after Gold…hills and then ended perfectly (like they did) with Whoa Mule. GDOTR. I wish it wasn’t the first song, buried deeper within the album would’ve made it seem to have a little more depth, in the first slot it just sounds like “the single”. Great extended intro by Steve and Adam. GDOTR is Still a very good tune, a departure in lyrics from the rest of the album, telling more of a story, rather than just illiteration. WBW – image if this opened up the album, youd be running for the hills…..This will be great acoustic song and it is so biting….comparable to horsehead in attitude and lyrics, but the music is much darker, grittier. An angrier blues number hasn’t been written by any of the Robinsons’ peers. O’JOSEPHINE – Beautiful, Lyrics are really good, best ballad since Pawnshop (or late nights again), great bridge and the outro coda is very much “fearless” on helium. EVERGREEN – Chris said this was a one take number, and it sounds like it. Much in the vein of soundcheck jamming Pastoral or YMOM, and then turning it into a Crowes song, this song was born of Rich and Steve starting something while rehearsing and Chris adding his lyrics. Great Song and great placement after O’Josehine. WEE WHO SEE THE DEEP- My favorite original song, To me this is the black crowes at their Sunflower, One Mirror too Many, Sometimes Salvation best. Unique, poignant, rocking, jamming all with a big hunk of keef ontop. I love Chris Lyrics particularly. Chris said this was born acoustic, I d love to hear it! LOCUST STREET – Wouldn’t be surprised if this was the next single and made it onto Country radio. Nice song, good hooks, and as mentioned this is straight out of the NEM vain. MOVIN..LINE- I expected this song to blow my mind. Having seen a handful of this jam live in 07 with Paul and hearing the clips, I thought Id love this tune …with that said…After Chris says “the wheel within the wheel”, “the water beneath the well”… I shouted…YES….THEY DID IT!!…..then they dropped into some mid tempo “rag time” and lost me for a stanza, they recovered but never really got me back. I just wanted that psychedelic punch in the gut from the boys (ala Tall) and it never comes….Still a good song, but man what it could’ve been in my own mind. Played live I am sure it will take on its own space and time and fall right in line with some of their other monsters. WOUNDED BIRD – “The seeker intro” is a nice touch by Rich An amazing start to the song and the verses come with a little snarl that you need. Chris wants to tell you something! This is a Great example of the Crowes doing what they do. Luther is great on the solo. This song could fit in with Surgical Glove on TMD. I wouldve liked this song placed behind (Gold..hills). GODS GOT IT – My favorite song (Is that wrong?). Just love the sound and feel of this cover, Great delivery by Chris and Luther and Rich, must love this romp….and I am so happy I will be hearing it live!!! THERES GOLD….Chris’ “Sin City”….A little too slow for me, taking it up a half wouldn’t have hurt it. The Bridge is fabulous and Chris voice is spot on. I do not like the placement at all, but that’s me. WHOA MULE – A perfect example of the Crowes in 2007, I love how this tune is truly traditional, but with their own flavor. Will love to see them do it live. This album was done on their own time, in their own head space.. The songs, lyrics and music all reflect what they have been saying publicly…..This is where they are right now. Like in "Whoa Mule” ....slow down, plenty of time, whats your rush…enjoy it…”we’re dirty, but we’re dreamin’ Overall parts of individual songs sound rehashed or flat. but, live I bet it still is the Black Crowes. This might be their last great album, because it is great."

"Personally I love this album. Every album seems to reflect where the Crowes are in their career/life/spiritual state of mind... and it really seems like the boys are completely at peace and meshing well with the new guys. I've known Luther from the Allstars for years, and he is a perfect fit for this new groove. The Crowes really show their southern blues background on Walk Believer Walk and some of their blues/gospel roots shine on The Rev's God's Got It. Warpaint reminds me of Dylan and The Band or The Stones' Exile on Main Street and Let it Bleed with the slight country twang hiding in the background. I can't really tell if this is a new beginning, an in-depth demonstration of their ever-widening musical talents or just something they wanted to do... whatever it is, I LOVE IT! Can't wait to see the O.D. Jubilee partyin' down on Beale St. this May."

Goodbye Daughters of the Revolution 303

There's Gold In Them Hills 286