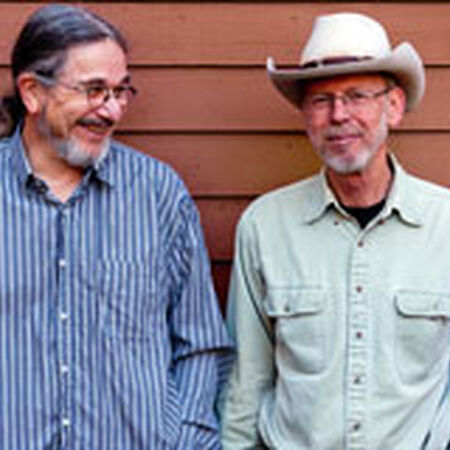 David Gans and Eric Rawlins have been making music together, mostly at parties and occasionally in public, for more than 20 years.  Recorded before a live audience in David's living room in Oakland, this album includes original compositions and many of their favorite songs by others and highlights the warmth of their musical friendship over time.

"It`s amazing how many different approaches David takes to music. "Desert Wind, Rollin` River" is not as muscular as Gans` Stage Shop solo show (which I reviewed earlier): rather it’s more of a gentle, lyrical journey - across America and through different decades - by a couple of old friends, and listening to it, I can picture them swapping yarns round the camp fire along the way. There`s nothing challenging about the music - it`s not a dramatic symphony, more of a gentle serenade - but sometimes that`s just what you need. Something warm, friendly and familiar; two people in perfect harmony on vocals and guitar accompaniment. Each of the songs tells a story, and most of them are on the theme of travelling, whether it`s "Waltzing Across Texas", "Going Back to Georgia", or "Leavin` Louisiana", and each of them is delivered with just the perfect amount of joy or pathos. Gans and Rawlins have been "making music together, mostly at parties and occasionally in public, for more than 20 years" and it`s clear that over this time they`ve developed the strongest of musical relationships. They fit together like a pair of fine silk gloves, with a similar shape and style and supremely comfortable together, but complementary - each one working with the other to provide a balanced whole. One of the songs strays further afield - to Kilkelly in Ireland. It tells a sad story which reminds us that we didn`t always have modern communications, and those people who emigrated from Ireland or the UK to the other side of the world (America or Australia) would probably never see their homeland and their parents again. There`s one cover that I`m familiar with - the superb Wheels by Chris Hillman of the Flying Burrito Brothers (from their 1968 album Gilded Palace of Sin) - and, appropriately, that`s about travelling too. The last Track, What`s Your Name is pure doo-wop and could have been written in the fifties (and possibly was) It`s such an intimate recording that it sounds as if they could be playing in your own front room - and, as it happens, the recording was made in David Gans` living room, and that`s an immense contribution to its considerable charm. The recording was produced by Stephen Barncard and, as you can imagine, it`s of the highest quality. And you can buy it (and all David`s other releases) at www.dgans.com/discography and also in the iTunes store, HDTracks.com, CDBaby.com, and other online retailers. This is probably my favourite of all David`s many recordings, and I do urge you to give it a listen - and to buy it too! CJ "

"What a lovely album with which to mellow out. The two troubadours harmonize wonderfully and manage not to step on each other`s toes while playing acoustic instruments. The song selection is stellar with old favorites as well as some tunes I`d never heard before. The original master was recorded at 96/24 for any audiophiles out there and the version on HD tracks takes advantage of the higher resolution. As with most advanced resolution formats, the acoustic instruments and vocals really shimmer and shine and I`d highly recommend it if you have the playback capabilities. On the other hand, the regular cd is encoded with HDCD which squeezes every bit of detail out of the CD format. Of course, the quality of the recording is secondary to the music provided and this album provides a lot of quality music. Buy this if you like acoustic music, you won`t be disappointed. "

"I`m massively enjoying this CD. Rawlins` and Gans` voices complement each other beautifully. Their pickin`, which has always been good, just gets better and better the more they play together. The recording quality is excellent. I love the choice of songs, from things like the heartbreaking "Kilkelly Ireland" to their own delicious creations like "Jaqueline" and "Salsbury Plains." And I love that they include the old doo-wop "What`s Your Name?" on the play list. This music makes my ears happy. "

"Great tearjerking, sometimes footstomping (or at least vigorous toe-tapping) Americana, with spine-tingling harmonies these guys have been polishing for a long time. Warning: If you are susceptible to goosebumps, use this recording only under a physician`s supervision. "

"I`m loving the hell out of this!"

Going Back to Georgia 226

Across the Great Divide 228

Leavin’ Louisiana in the Broad Daylight 189

Until I Gain Control Again 255