Songs Of Our Fathers 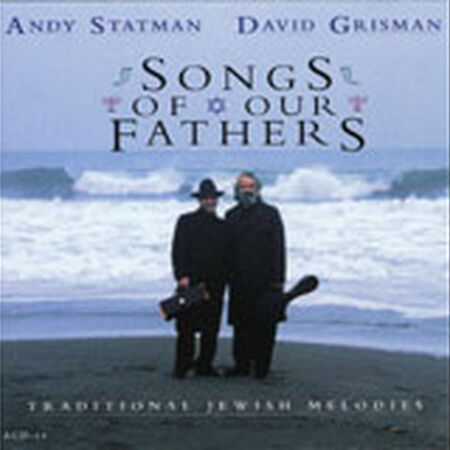 For the Sake of My Borthers and Friends 355

Two of the most creative mandolin players on the contemporary scene, David Grisman and Andy Statman, explore their shared heritage with a moving collection of traditional Jewish music called Songs of Our Fathers. Powerful and passionate, this compilation of instrumental music is guaranteed to take acoustic music lovers places they have never been before. "These songs are very simple but they contain great depth," says Statman, who is also a world-class clarinetist and an Orthodox Jew. "The more heart a player has, the deeper he can go. If you listen with heart, you'll get there too."

The music on Songs of Our Fathers ranges from liturgical melodies written hundreds of years ago to uplifting dance music played at weddings and religious celebrations. Much of the music is influenced by the Jewish instrumental folk music of Eastern Europe known as Klezmer. Still, the music on this collection has its own flair, reflecting the extraordinary talent talent of the musicians who participated in the project. Grisman and Statman solicited the help of the great Hal Blaine on drums and percussion, the incomparable Edgar Meyer on bowed bass, Zachariah Spellman on tuba and David Grisman Quintet members Enrique Coria (guitar) and Jim Kerwin (bass).

Songs of Our Fathers comes packaged in a special slipcase (in both CD and cassette configurations) and includes a beautiful, 36-page booklet of photographs that capture the time and the place of the music you are listening to. Most of the pictures are historical documentation of Jewish life before World War II in Eastern Europe, where so much of this music comes from. The booklet also includes a brief history of Jewish music in general and details about each of the songs in particular.