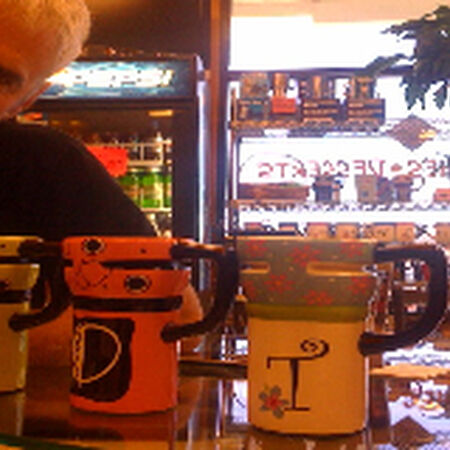 On the riverfront at the Rev Room. Really beautiful club and great sound system.

It was our first time there. Not a huge turn out but a great crowd. The vibe was a good mix of scene-sters, clubbers, and jamband fans. It seems like a good place to grow into.

Started out "four on the floor" as usual so there's no doubt about the dance factor with us. For some reason I was feelin' Seal so I hit the "Crazy" chorus. I got some calypso legend Lord Kitchener's "Gee me the Ting" in there. My dad would sing that song during his shows in Miami when I was a kid and it comes out in me every now and then.

In the second set LL Cool J's "Mama said knock you out" was on hand with my high pitch shifter effect. Travis made up a chorus combining his voice with a synth effect - different from his daft punk robot sound.

You never know city to city what genre the dancefloor is going to respond to. We were sort of all over the place the first set including a 210 bpm drum and bass. A little self indulgent, but the peoples were with us. Seems like they got off most on the hip hop so we cruised in that zone for a big chunk of the second set. We ended up doing a nice hip hop/Reggae feel that worked well. I threw in some "out in the street..." (if you know, you know) and tried to mimic the air horn sound and dub it out.

I'm sure we'll be coming back to Little Rock to play at the Rev Room again.