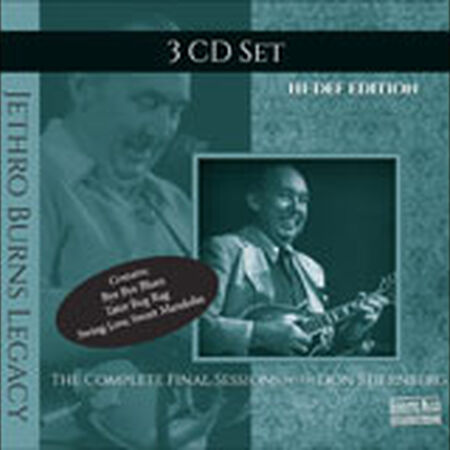 The Shadow of Your Smile 144

Jeanine I Dream of Lilac Time 227

I Can't Give You Anything But Love 157

Tuck Me To Sleep - Alternate Take 124

You Stepped Out Of a Dream 228

Breezin' Along With the Breeze 176

I Thought About You - Alternate Take 135

Kenneth “Jethro” Burns was the greatest exponent of mandolin jazz and a true pioneer of American string music. Throughout his 50-year career, as half of the renowned musical comedy duo, Homer & Jethro and later as a soloist, he re-invented the way the mandolin is played.

In 1987, after learning he had cancer, Jethro set out to document a lifetime of his favorite music. During four informal basement sessions, Jethro and his protoge’ Don Stiernberg recorded 50 tunes, many of which were released on two Acoustic Disc CDs in the 1990s.

We are proud to present these historic recordings in their entirety — 62 tracks including 13 previously unissued songs and 12 alternate takes, re-mastered in the high-definition (24-bit, 96 khz) format.