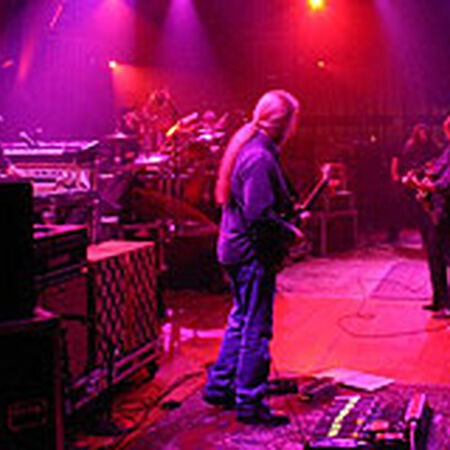 "I've been to quite a few shows over the last couple of decades, this one is definitely in the conversation for the best show I've ever caught. While people generally have different experiences and takeaways from shows, everyone leaving the theatre at the end of the show knew what Panic had done, and it was clear Panic knew what they just did.... Listen for a bit after Goin' Out West ends, JB stayed around for a second to finish his drink and play a few notes before dropping his guitar and walking off stage. Never seen a show quite like this one. Highly recommended. You won't hear it, but someone threw something at the stage during Action Man (not recommended) and it almost hit JB... I thought/still think the encore was directed at that person in the balcony. The band gave us a real good treat that night. Highly recommend this show, whether or not you were lucky enough to catch this one."

"Highly recommended... I've seen Panic 37 times before this Savannah run, and all I can say is that this show is extra special! Smokestack Lightning and Vacation first set?!? Uh, yeah, they're bringin' it. Then, I've always wanted to hear Jimmy play Morning Dew, and this version is EPIC. Sleepy Monkey is probably my favorite song they play and then they follow it up with Heathen, (never saw that one coming). It all adds up to quite possibly my favorite show I've ever seen Panic play. Straight FIYAH! Masterfully chosen setlist. Top-notch jamming. What else do you need to know? Download this one right now!"

"... and why would I want to close my eyes and dream it's Mikey ?!?! I am plenty satisfied closing my eyes, listening & KNOWING it's Jimmy F'king Herring & crew tearing shit up, like -N E V E R- before. Panic has very rarely hit the heights they hit night in night out, with Jimmy .... and hell no, I am not even close to a newbie to this music. LOVE IT for what IT IS and don't try to compare 'it' now to what 'it' was ..... b/c it ain't even close !!!! treats."

"By far the best show with Jimmy yet...close you eyes and dream it's Mikey. Only 3rd time in 20 years for Heathen...UNBELIEVABLE! Morning Dew>Coconuts smoked! Add this show to your collection before any others!"