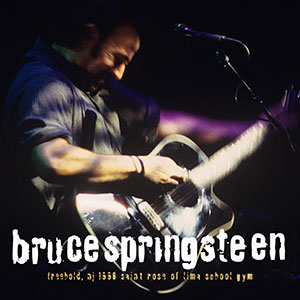 Even for a career marked by legendary performances, Springsteen’s 1996 return to his hometown of Freehold, NJ stands out as extraordinary. Held in the gymnasium of St. Rose of Lima, the Catholic parochial school Bruce attended growing up, the one-off benefit concert might be the sweetest “prodigal son returns” narrative in rock concert history.

In hindsight, a deeply personal Springsteen solo performance at an intimate venue sounds not dissimilar to his current run on Broadway. Shows like the Christic Institute in 1990 (released as part of the live download series), Freehold 1996 and the Doubletake benefit in Somerville, MA 2003 are antecedents to Bruce On Broadway, juxtaposing Springsteen storytelling at its most personal with special setlists.

What makes Freehold particularly heightened is that Springsteen isn’t playing to his fans per se, he is playing to the people in his hometown (tickets were strictly limited to Freehold residents only), family and relatives and some of the very Sisters and Fathers who oversaw St. Rose of Lima then and now. One might say Bruce was throwing his own acoustic confessional at the scene of the crime.

“I wouldn’t have believed it myself if I wasn’t standing here, right under the cross,” Springsteen admits at the top of the show, “What can I say? Myself, I’ve been excommunicated with the divorce and all, but it’s still great to be here. I told my buddy Steve, ‘I’m playing Friday night.’ ‘Where?’ ‘At my Catholic school.’ And he says, ‘Oh. Revenge!’ I said, ‘No. Well. Maybe just a little bit’.”

The many comedic moments of Freehold shine, and so too the songs. Joad material like “Straight Time,” “Highway 29,” and the title track are in peak tour form, as is the four-pack of “Sinaloa Cowboys,” “The Line,” “Balboa Park” and “Across The Border.” Tour standouts “Adam Raised a Cain,” “Johnny 99” and “Born in the U.S.A.” also hit home with something a little extra this night.

“When You’re Alone” from Tunnel of Love is played for only the second time ever (and one of but 12 public performances) in a pure, beautiful arrangement featuring Soozie Tyrell on violin and Patti Scialfa on backing vocals. It is one of an impressive nine tour premieres in Freehold, some specially chosen like “The River” and “Racing In The Street” (both featuring Tyrell), some audibles, as Bruce tears up the set list mid-show for “Open All Night” and “Used Cars” in their only Joad-tour performances; the same goes for “My Hometown.”

The combination of musical highlights and humorous candor in such a setting makes Freehold one for the ages. So how do you end such a transcendent night? With the world premiere of the song of the same name, “Freehold,” an autobiographical narrative that literally sums up Bruce’s history with his hometown, name-checking many of the places, spaces, events and people that influenced him in those formative years. It even delivers one final uproarious nod to “revenge” in the delightfully contradictory couplet: “Well I got a good Catholic education here in Freehold / Led to an awful lot of masturbation here in Freehold.”

Until a release of Bruce On Broadway, Freehold ‘96 might be the closest substitute, the night Springsteen returned triumphantly to his hometown on his own terms.