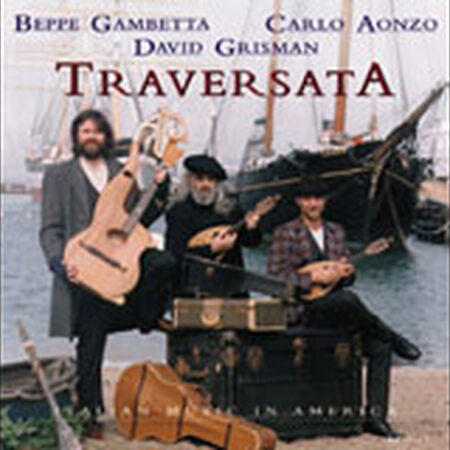 Italian music in America is the focus of Traversata (ACD-47), the new Acoustic Disc release by David Grisman and Italian string masters guitarist Beppe Gambetta and mandolinist Carlo Aonzo. Traversata means "ocean crossing," the method by which the first Italians emmigrated to America. With them they brought mandolins, guitars and, of course, a rich musical heritage. This release, like its artistic predecessor Songs of Our Fathers (ACD-14), not only deals with the music transported across the Atlantic but what happened to it in the melting pot, how it ultimately traveled back home and the effect it had there.

The varied and beautiful repertoire explored by this international trio ranges from the Golden Age of Italian opera, such as PucciniÌs "Oh, Mio Babbino Caro" and Mascagni's "Intermezzo," to music of the great Italian string virtuosos like Raffaele Calace, Giovanni Giovale and Pasquale Taraffo. Also featured are compositions by American jazz guitar pioneers which reflect their Italian origins including Eddie Lang's "April Kisses" and "Pickin' the Guitar" by Nick Lucas. Rounding out the collection are works by noted Italian film composer Nino Rota from his famed Godfather soundtrack and San FranciscoÌs own mandolin godfather, Rudy Cipolla.

Traversata is an exquisitely crafted work played on traditional acoustic instruments including the authentic "bowl-back" mandolins which originated in Italy and a unique custom-built 14-string harp guitar. Recorded "live" to 2-track analog, it features the exceptional sound quality and musical excellence for which Acoustic Disc is known. The CD includes a 20 page, full color booklet with historical photos and notes plus slip case packaging.