Frank 'N' Dawg Setlist at on 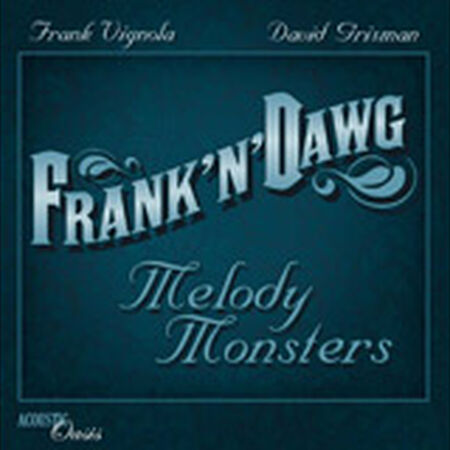 "“Melody Monsters” is some of the most beautiful recordings of acoustic jazz string playing I have ever heard. The tunes are from the Great American Songbook.........stuff you might hear Ella, Frank, Ray, or Willie singing........classics with beautiful melodies, like “Stardust” composed in 1927 by Hoagy Carmichael. This Frank’n’Dawg version starts with a wonderful, and long, improvised guitar into by Vignola, and there is Grisman playing ever so cool chords behind him. Then the mandolin takes over with the melody.......and Dawg has all the technique in spades, to bring out the best in the melody........taste, timing, and tone.......in and out of triplets, or a flurry of syncopated signature Dawg licks at the turnaround, so smooth and melodic everywhere, especially in his expressive tremolo.......really soulful, heartfelt playing, and did I say great TONE. This music is really faithful to the melody, the creativity of these duets comes mostly in the arrangements, the chord voiceings, or the groove and rhythm patterns.... even where on the neck they play the melody, the dynamics of volume in their playing, or the tags, something as simple as how they kick off or end a tune. This music is about melody, rather than being just about hot licks and improvisation. I found it to be incredibly beautiful music.......think Homer & Jethro at their straightest and best, or Grisman’s Tone Poems II, with Martin Taylor. This music takes it to another level. Frank Vignola plays perfect backup, the way he accents parts, changes gears varying his dynamics, the way he throws in a few measures of harmony & back into the chords.......is pure genius. His solo intro to “Georgia” is worth the price of admission itself. But I find these versions, of these compositions, to be true duets, as they obviously both are really listening each other in order to get in sync like this. The sensitive musical conversation & exchange, of two master musicians, makes this recording one I’ll listen to over & over. Other selections include “Hello Young Lovers” a show tune from the 1951 Rodgers and Hammerstein musical, The King and I, or we all know "April Showers", or how about “Some Day My Prince Will Come” which was a popular song from Walt Disney’s 1937 animated movie Snow White and the Seven Dwarfs. I have great versions of Miles Davis doing this. Jazz cats have played these kinds of popular songs as instrumentals for years, because it is great material, pure classics........but I'll tell you, these mandolin and guitar duet versions are special! I’ve never heard them played on acoustic stringed instruments, and recorded this well before, it is like the musicians are sitting in the room with you! The recording is so pure, I can ever hear a few different mandolins being used on different tracks. This music makes me want to go out & get some of these charts, and find a guitar playing buddy. These aren’t blazing fast tunes, just beautiful slow and mid tempo melodies, and I’m thinking there are a lot of lessons to be had trying to play along with this music. Acoustic Oasis has a winner...........keep ‘em coming David!!! "

"Wow, so tasty. Simple, raw and lush at the same time. I've only listened to three tracks so far, but the melodies and the rhythms are just damn nice. I will crack open a nice bottle of wine this weekend and I will toast every tune. Do us a favor and do a tour of Nor Cal."

Someday My Prince Will Come 139