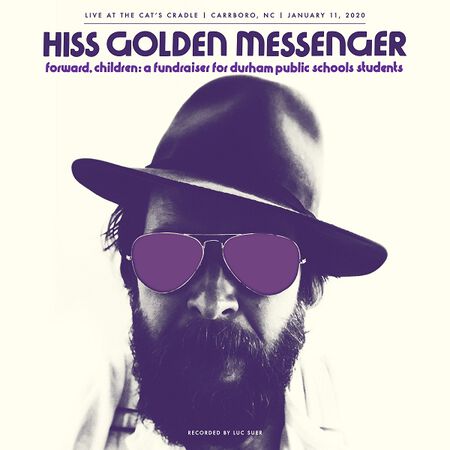 All proceeds from this album support students in the Durham Public Schools system.

When M.C. Taylor moved to North Carolina more than a dozen years ago now, Hiss Golden Messenger was his private enterprise, an outlet for the curious songs he composed quietly at his kitchen table in the country. But soon after Taylor and his budding family moved to a modest home nestled back from busy roads in the gentle Durham hills, he began building a network of local aces, all sympathetic to songs that documented his quest to be a better human being. Hiss Golden Messenger became and remain a community endeavor, an indelible part of North Carolina’s historic and contemporary musical fabric. The 15 songs of Forward, Children: A fundraiser for Durham Public Schools students are an instant illustration of that decade-long arc, a one-night snapshot of Hiss Golden Messenger’s metamorphosis from solitary songwriter fare to full-band jubilee.

Just days into 2020, the quintet—well-rested from a holiday respite after a busy 2019 that included some 60 shows across the United States and the release of the gripping Terms of Surrender—loaded into their home region’s legendary hub, Cat’s Cradle, for a two-night stand. For nearly 90 minutes, they smoke, sorting through the greatest hits of the Hiss Golden Messenger songbook with the intuition of a band that accepts these tunes as gospel but...  more

Recorded and Mixed by Luc Suer.

Mastered by Chris Boerner at The Kitchen in Carrboro.

Many thanks to all who generously helped in the creation of this album, including Luc Suer, Chris Boerner, Brent Lambert at The Kitchen, Merge Records, the venerable Cat's Cradle, Grayson Haver Currin, and Darryl Norsen. Love to the amazing Hiss crew for keeping the literal and figurative wheels on the bus: Jocelyn Romo, Ellowyn Kane, Carly Bingham and Billie Feather. Thanks to Brian Schwartz, Rachel Miller, and the whole 7S family, and to Adam Voith.

When the Wall Comes Down 347