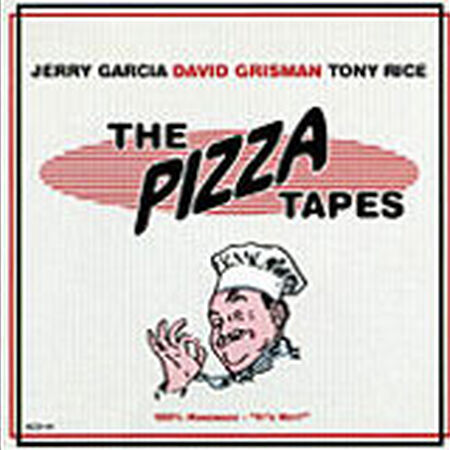 Drifting Too Far From The Shore 294

House of the Rising Sun 485

Legend has it that a pizza delivery boy lifted Jerry Garcia's cassette tape of two evenings worth of very special music from his kitchen counter, thus paving its way into underground tape trading circles and giving a handle to these incredible performances. Now at last, from the vaults of Dawg Studios comes the sonically superb official release of this historic jam session, the only meeting of guitar greats Jerry Garcia and Tony Rice, introduced to each other by their mutual friend and musical associate, mandolinist/ producer David Grisman. The Pizza Tapes capture these virtuosos at a rare moment in time, free of pressure, hassles or any given agenda other than making music and having plenty of fun.

Jerry sings several tunes not only unique to his repertoire but captured here for the first and only time: "Long Black Veil," "House of the Rising Sun," and "Man of Constant Sorrow." Along with the folk/country classics "Rosa Lee McFall," "Little Sadie," and "Louis Collins" are jazz-infused versions of "So What," "Summertime" (a Garcia/ Rice guitar duet) and several free-form extended trio improvisations. Emotional renderings of "Amazing Grace" and Bob Dylan's "Knockin' on Heaven's Door" add the final topping to this already spicy pie; and with the tape left rolling, the listener is literally right in the studio with the guys as they let it all hang out in between tunes-it's like getting extra toppings for free! The Pizza Tapes is a landmark recording and one of Acoustic Disc's best sounding releases. Get it while it's hot!