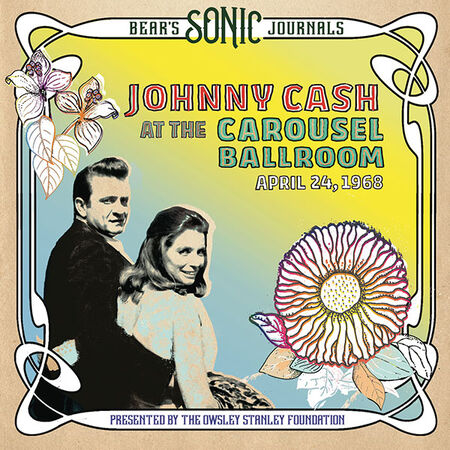 After a tumultuous 1967 for Johnny Cash, the year 1968 was bookended by what would become his two iconic, highest-grossing albums, At Folsom Prison and At San Quentin. But now, fifty-three years later, a lost chapter has emerged to enrich and complement the story of that very good year.

Johnny Cash – At the Carousel Ballroom, recorded on April 24, 1968, captures the Man in Black at the height of his charismatic powers. Confidently departing from the more formalized setlist he’d been doing, we hear him in playful and powerful dialogue with his new bride June Carter and his longtime musicians—guitarist Luther Perkins, bassist Marshall Grant and drummer W.S. Holland—connecting with an audience more accustomed to the Grateful Dead and Jefferson Airplane.

What makes the performance even more significant is that it was recorded by the innovative sound wizard Owsley “Bear” Stanley in a verité style that startles with a clarity and dimension missing from the two more well-known releases. In 1968, it was just another entry in Bear’s continuing “sonic journal” of recorded shows, a means to keep improving his art. But thirty years later, Stanley would recognize it as one of a handful of the most significant performances he’d captured.The Owsley Stanley Foundation presents Bear’s Sonic Journals:

* Featuring more than an hour of live performances from April 24, 1968 at the Carousel Ballroom in San Francisco, CA.

“A masterpiece. Dad gave what I believe to be one of the most intimate and connected shows I have ever heard.” –John Carter Cash

“I don’t think there are any live recordings of Johnny that weren’t originally intended to be an album. So to be able to stumble across such a live recording during such a golden era for him, and find that it was recorded in such a dynamic way, is incredible. It’s an opportunity to show Johnny in a new light. When John Carter Cash heard the first fifteen seconds of this recording, he recognized it as something significant. It has a three-dimensional, dynamic quality that a lot of live music from that era does not have.”–Josh Matas, on behalf of the John R. Cash Trust

The Ballad of Ira Hayes 173

One Too Many Mornings 123

This Land is Your Land 55