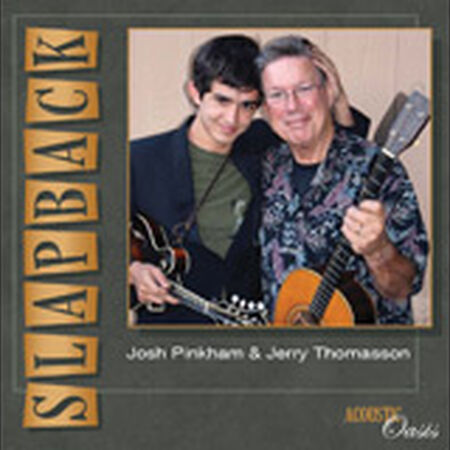 "Josh Pinkham’s first solo album is titled “Slapback”, and was recorded at Dawg Studios. I first got to meet Josh & hear his playing in person at the Mandolin Symposium a few years ago, he was there with his father, also a talented musician. But the family roots go deeper than that, in fact he is backed up on this album by his grandfather Jerry Thomasson, a rhythm tenor guitar expert. And maybe you’ve heard of Jerry’s dad Benny Thomasson, the legendary Texas fiddle champion. Josh is an amazing prodigy, have you seen the youtube videos with him sitting in with the DGQ, or playing in bands fronted by Frank Vignola? I’ve seen most of the new crop of mando-phenoms and I’ll tell you this kid has it all, plays in a jazz influenced style, and while standing on the shoulders of all who came before him, I’d say he best emulates one of his mentors, Mike Marshall, the most. Josh Pinkham has unlimited potential, technique wazoo, and mature taste and ideas in his solos, especially considering his young age. The CD starts out with an original composition “Slapback”, a jazzy new acoustic tune requiring Thile-esque technique to pull it off. Many of the tunes are duets with his grandfather, others add Sam Grisman on bass, and David Grisman adds mandolin on a hot twin mando version of his tune “Albuquerque Turkey”. The other tunes range from more traditional tunes like “Cold Frosty Morning”, to the champion fiddle competition tune “Limerock”, to a classy bass mando duet on “Angeline the Baker”. I found myself getting up to boogie along with his romp though “Sally Goodin”, grabbing a mandolin to slap some rhythm, play along and back him up. Jazzier selections include Fats Waller’s “ Ain’t Misbehaving”, Benny Goodman’s “Slipped Disc” and a cool version of “Sweet Georgia Brown”. There are a few other compositions penned by young Pinkham, a swinging Django-esque tune “Joshin”, and a beautiful sensitive ballad titled “I Might As Well”, that has a few changes in tempo, making for a wonderful composition. If you haven’t heard Josh Pinkham, download “Slapback” immediately.......you won’t be sorry. This is a very mature first recording by young Josh. You know..... this music stands on its own, as great music by any musician, regardless of age. The mandolin is in good hands as the next generation matures and comes of age. His family must be very proud, as he now obviously carries on their musical legacy."