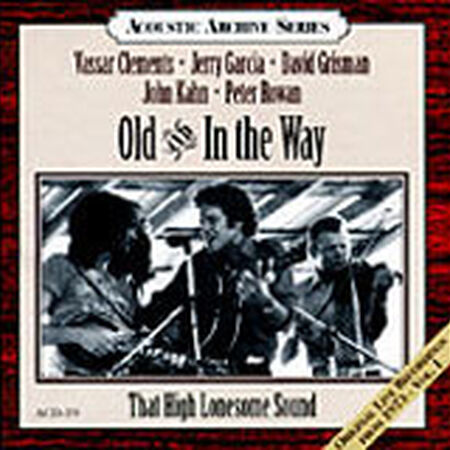 This new recording features 14 new and previously unreleased songs from the original live performances that produced the acoustic excitement captured on the first Old and In the Way. Jerry Garcia picked banjo (his first instrument of expertise) and sang in this legendary band which played together, mostly in Northern California, for only nine months in 1973. This unique group of talented individuals featured, in addition to Garcia, Peter Rowan on guitar and vocals, David Grisman on mandolin and vocals, Vassar Clements on fiddle and vocals, John Kahn on the upright bass, and exposed a huge number of people to bluegrass for the very first time.

One of the great things about Old and In the Way was its eclectic and extensive repertoire. This recording includes hard-core bluegrass classics like Bill Monroe's "I'm On My Way Back to the Old Home" and "Uncle Pen," Jim and Jesse McReynolds' "Hard Hearted," Vassar Clements' amazing fiddling on his own "Lonesome Fiddle Blues" and "Orange Blossom Special," as well as Peter Rowan favorites like "The High Lonesome Sound" and "Lonesome L.A. Cowboy." There's also an inventive bluegrass arrangement of the 50's pop ballad, "The Great Pretender" and an evocative performance by Jerry of the gospel anthem "Angel Band." All this, plus a 20-page booklet featuring rare photographs and notes by bluegrass scholar Neil Rosenberg, make this release a must for all bluegrass fans, deadheads, dawgheads and lovers of American acoustic roots music.