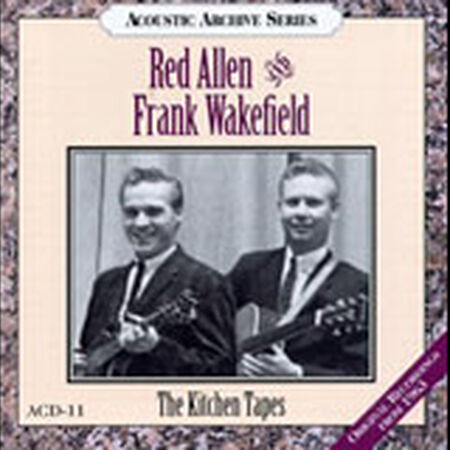 Turkey in the Straw 60

Down In The Willow Garden 148

Summertime Is Past and Gone 152

Over the Hills to the Poorhouse 132

Paddy on the Turnpike 65

'Tis Sweet to Be Remembered 196

Sweetheart You Done Me Wrong 198

Lovers of traditional bluegrass won't want to miss The Kitchen Tapes, the first in the Acoustic Archive Series featuring recordings of rare artistic and historic merit not originally intended for release. The Kitchen Tapes was recorded on the afternoon of April 11, 1963, in the Hyattsville, Maryland, kitchen of bluegrass mandolin genius Frank Wakefield. There he and his partner, the legendary singer-guitarist Red Allen - two bluegrass masters in their prime - jammed freely for hours. Surrounded by their wives and kids, a reel-to-reel tape recorder, and a strategically placed microphone, these incomparable musicians played songs that have come to embody the essence of bluegrass: "Nine Pound Hammer," "Over the Hills to the Poorhouse," "Bluegrass Breakdown," "Billy in the Lowground," "Crying Heart Blues," "New Camptown Races," "Down in the Willow Garden," "Raw Hide," and 17 more!

Also present at this gathering were David Grisman and Peter Siegel, both 18-year-old New York University students and budding folk musicians who convinced Red and Frank to let them record an informal session for their learning and listening pleasure.

The session proved to be a watershed event in both their careers. Siegel became a distinguished producer of great music for Elektra Folkways and many other independent record labels. And Grisman (who literally wore out his copies of the tapes learning the tunes note-for-note) went on to produce
and play on some of the finest acoustic recordings of the last three decades. The Kitchen Tapes is dedicated to the memory of Red Allen, whose death on April 3, 1993, virtually marked the 30th anniversary of this recording. The Kitchen Tapes offers a rich, intimate glimpse of two great musicians making music for the pure joy of it. It is a must-have for anyone interested in traditional folk and bluegrass artistry.