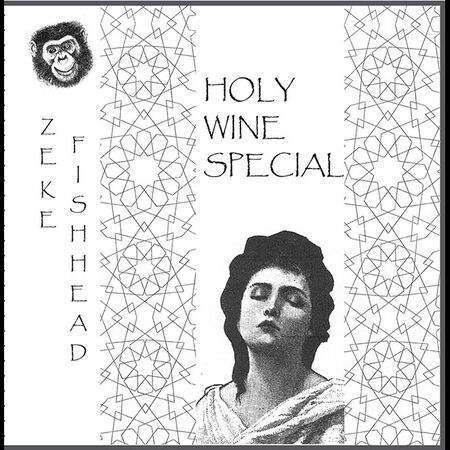 Introducing the newest release from Zeke Fishhead, HOLY WINE SPECIAL.  This collection of songs was recorded by Ed Volker at Ztudio Zeke in New Orleans in 2017.  Many were penned in 2016, with a couple classics that will be familiar to the hardcore Fishheads like JOLLY HOUSE and MY BABY’S GOT THE BAD KUNG FU that have been recorded and released here for the first time ever.  Here’s the skinny straight from the source:

'There are a lot of tunes I’ve played on live gigs outside of RadsWorld that I’ve begun the process of making good recordings of here at Ztudio Zeke that I’ll be including (where they seem to fit) in compilations of the current joyful agonies …THE BLUE DISTANCE hails from the same period as JOLLY HOUSE (’96) …. before I put together JOLLY HOUSE with Joe Cabral, Mike Skinkus, and Reg Scanlan, I had a duo with Mark McGrain (trombone, harp) that played one or two Mondays a month at Snug Harbor (’96 through 2000) and BLUE DISTANCE was a tune we did often ….I wrote JOLLY HOUSE before the actual group came together …the cab I was riding in one afternoon down to the French Quarter had to make a detour down Barracks St. because of some road work on Esplanade and we passed this abandoned bar that had a small triangular sign still hanging above the door with HOUSE OF JOY spelled out in yellow light bulbs, and the light bulbs in my own spirit- box began to light up with tuneful possibilities ….CIGAR BOX could be said to be an attempt of using the blues to take the pulse of my Spiritus: I was surprised when a  listener recently mentioned that my singing on BOX sounded happy - I figure if you’re gonna sing about the graveyard, it behooves you to sound as happy as possible ….I’ve always liked BAD KUNG FU a lot and I’m looking forward to featuring the approach I’ve taken to the song on HOLY WINE SPECIAL with QUINTET NARCOSIS on our upcoming Jazz Festival appearances ….

Loving A Woman From The Other World 228

That Little Bit Of Fang 288

When Your Way Gets Dark 441