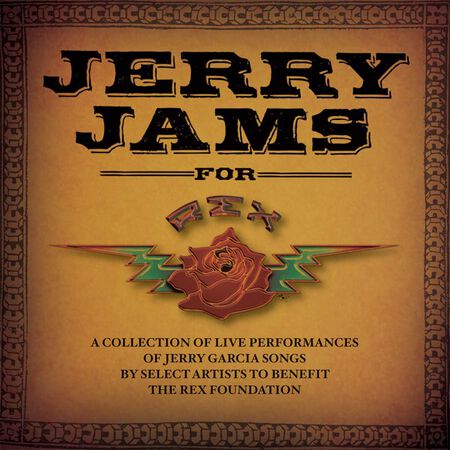 August 9, 2010 marks the 15 year anniversary of legendary musician and Grateful Dead co-founder Jerry Garcia’s death. As a way to honor his musical and community legacy, the gifted musicians on this compilation have generously contributed stirring live performances of Jerry Garcia songs to benefit the Rex Foundation. Available August 10 in a variety of formats (see below), Jerry Jams for Rex was brought to life by Brad Serling of nugs.net and includes four exclusive previously unreleased live Garcia songs from Phish, Bruce Hornsby & The Noisemakers, The String Cheese Incident, and Keller & The Keels. Other artists featured on the album include The Black Crowes, Yonder Mountain String Band and more. All proceeds are a contribution to the Rex Foundation.

Furthering what Jerry Garcia and the Grateful Dead started, the Rex Foundation was born in 1983 as a way to fund bold and innovative grassroots programs that carry out essential work toward a healthy environment, promotion of the arts, protection of indigenous cultures, assisting others less fortunate, building strong communities, and educating children and adults everywhere. A non-profit charitable organization, the Rex Foundation has distributed $8.6 million in grants to over 1,000 programs across the U.S. and internationally, while also carrying out fundraising initiatives that foster creativity and positive community connections. Visit rexfoundation.org for a complete list of grantees and information about current initiatives.

Jerry Jams for Rex is possible because of the honorable contributions of music, resources and know-how of the participating artists and people involved in the initiative. The Rex Foundation extends its heartfelt thanks and appreciation for the generosity of spirit and action of the following people involved in creating Jerry Jams for Rex, as well as to all the people who purchase the compilation. Together, we honor Jerry Garcia and demonstrate the positive power of music and community spirit.

* previously unreleased, exclusive to Jerry Jams
** bonus download only tracks, not on the CD

"The best part about Terrapin is the crowd. Don't get me wrong, they fucking killed it. But that energy in that crowd!!! I heard some dude talking about having this show on CD during '98 fall tour and that was a big deal. And now we are listening to sbd recordings the day after. I just remember how happy I was when I had a clear tape recording. "

"Phish has been successful at making Terrapin Station there best cover tune ever. The worst: L.A. Women 12-30-03."

"I don't think GE Smith is still playing with Moonalice."

"FYI Moonalice is a hot little band. GE Smith on guitar and Barry Sless on pedal steel and Jack Vassidy on bass and Pete Sears on keys, among others. Even though GDTRFB is not actually a Jerry song he definitely tool it furthur than any other artist. "

"Why on earth is MoonAlice on here? "