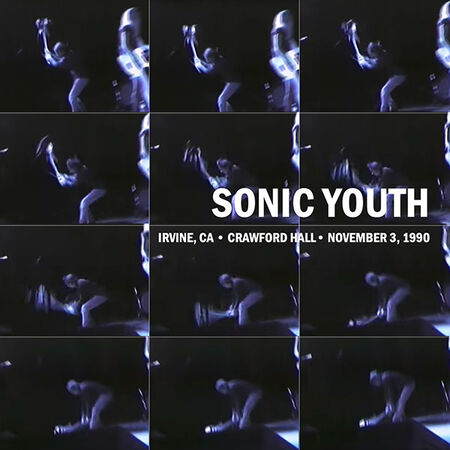 For the first time, this multi-tracked concert, parts of which have been previously released, is now available in its entirety.
By my count, this was the 59th SY show of 1990, all highlighting Goo material, with a couple classic oldies thrown in. So, pretty much by this time the band was tearing it up on these songs.  Plus, it’s mid-tour, so the band is in the groove. It’s like the adage that one should not buy a car made on a Monday or a Friday.  The beginnings or ends of tours might have more experimentation or exploration, but if you’re looking for a solid chunk of Rock, mid-tour shows are reliable.  And, like an anonymous face pulled from the crowd, upon scrutiny the depth of character is revealed, and with enough listens any blemishes become beauty marks…
But this analogy assumes there’s a crowd to choose from, and if we’re talking about Sonic Youth live tapes, in the late 80’s only a rarefied priesthood had access to those.  Then a couple months after this show, suddenly it was 1991, the Year Punk Broke.  In the early 90’s we fans outside of the big cities were desperate for clues.  All we knew was word of mouth at hardcore shows, or the cool older girl at school had a tape of Goo, or maybe somebody had a copy of Maximum RocknRoll.  We’d save up our minimum wage dollars and find somebody who had a car and knew how to drive to the one punk record shop in the big city.  That’s where I got my first major SY score: a fan pack that included an issue of the band’s self-made fanzine Sonic Death plus a CD of the Goo demos.
Then suddenly out of nowhere appeared something we’d never even heard of: Tower Records. It didn’t have the same cred as indie stores, but it was an outpost of cosmopolitanism we were grateful for.  And they held more clues to the puzzle...an issue of Guitar Player with Thurston on the cover and actual SY tunings listed inside...and then, one day, the “Dirty Boots” CD-5, which offered 5 live songs from Irvine, California 1990. For me, and for many other people I think, this show was our first ever experience of Sonic Youth live. On first listen, the SY live world seemed more raw and baffling than even the albums themselves.
Fast forward to early 2005: I was working at Murray street with Steve Shelley on assembling the Goo Deluxe Edition release.  We had several lists and boxes of potential material.  This Irvine show was high on the list, mostly because it was multi-tracked so could present live material from the time in the highest fidelity.  I’m not sure if the band were even present for the original mixes that were on the Dirty Boots EP, but by almost 15 years later those mixes were sounding dated to Steve and me. So we decided to remix the show.
At that time, we were hearing the band in a straightforward, no-frills sort of way.  We were more concerned about the mix as a performance than about adding “ear candy” - delays and harmonizer and such. We mixed one song at a time, through the Neve 5106, printing to ½” tape. We’d do a couple passes of each one until we felt like we had a solid performance...maybe we even cut together mixes...there was a lot of splicing tape in those days. It was old-school mixing, with grease pencil marks next to the faders and 4 hands on the board.  Maybe the snare had to be pushed up to the yellow grease pencil mark during the instrumental section, and the guitars pulled back to the second set of white pencil marks during the vocals, stuff like that.
Neither Steve nor I were particularly immersed in taper culture, so this version of the concert doesn’t follow the conventions of the taper world.  We were thinking of 70’s double live LP’s like the Ramones It’s Alive or Neil Young’s Live Rust. So we thoughtfully cut out a lot of the dead air between songs.  Some of the other shows we’ve put up recently have all the space left in, but I like that we made a specific piece in 2005.  Even listening to the mixes now at first I think “Oh I’d never do it that way now, we should remix it.” but then my ears shift and I can hear the musicality in what we were doing at that time, and I’m not sure we’d re-capture that if we tried again.
When the mixes were done, they moved on to the next round of balloting for what would actually be included on Goo Deluxe.  I think it was the right decision to put the Goo demos on there instead.  Those are so good, and provide such a great counterpoint to the polished final album.  But, as a consequence, these mixes (apart from “The Bedroom”) have sat on the shelf until now.
Unlike the early 90’s when we were desperate for more info, there’s just almost too much out there these days.  As more Sonic Youth material comes out of the archives it’s my hope that the band can be presented in a variety of ways; I think it gives the listener more perspective, and provides for a more interesting listening experience if everything doesn’t sound same-y.  So, I hope people find this mid-aughts take on 1990 a compelling listen. I think it’s a shredder.
-Aaron Mullan, January 2018