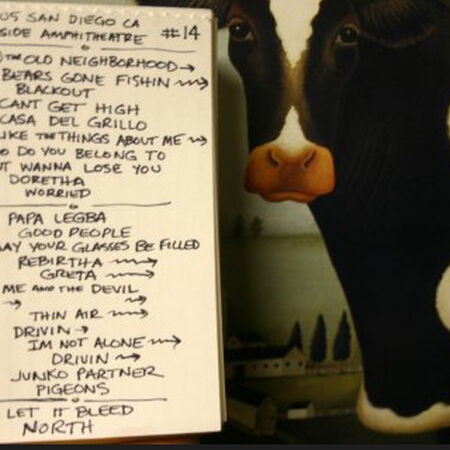 May Your Glass Be Filled 283

"Good mellow show at a beautiful venue. Yet the show had a lot of slow moments, and I kept wanting them to pick it up a little, and then we got the Thin Air, Driving>Alone>Driving, Junco Partner Pigeons. Yummy! The WDYBT from the first set was also killer. That being said, I was happy with the very beginning of the show too as I love me some Old Neighborhood. It slowed down a bit after George`s I Like the Things About You and the when George sang his second song in one set (Doreatha)it seemed like overkill. He sang the Let it bleed later as well. Gotta give props to George, but it just seemed like too much in one night. Overall, this is a great show that I listen to all the time as the mix sounds real good, but it definitely has some weaker moments and is not as energetic as the Wiltern shows that followed. I still glad to pay my 13 bones for it. "

"My frist time seeing Panic. I was introduced a few years ago from a friend from Florida who has seen them maybe a hundred times or so. From beginning to end Panic didn`t let up. Solid show and jam filled. Wasn`t that big of a fan of Bombs and Butterflies until this show. Greta and Rebirtha had me dancing and Papa Legba was a jam. I`m Not Alone is always a welcome surprise too. Would like to hear Pleas at a future show..."

"First Widespread show. Truly an honor. The crowd was chill, though SoCal folks tend to be a bit hesitant to dance;like they`re too cool or something. Started early, but it was awesome. Never go to a show expecting to hear a certain song, but I did. Just as I was becoming dissapointed that they would not play it and hoping it would be the next song, the first notes began to manifest "I`m Not Alone" NO JOKE!!! Crazy experience. Next year perhaps....."

"I haven`t seen Widespread since the late 90`s when I lived on the east coast. I was amazed! This show was awsome. Beautiful San Diego night with Widespread going off..."