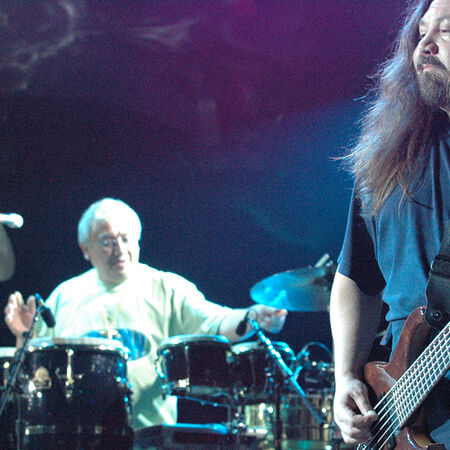 Nobody's Fault But Mine 459

"This show is one of the two or three must-have downloads of the tour. Jay`s review below is dead on. You could tell the boys were there to play from the first note of Thought Sausage. Check out Huntsville and Asheville for shows with similar precision and energy."

"Much love and respect to the Tech Folks, Crew Folks, Lighting Lady, Logistical Folks. You folks keep raising the bar, and I can`t tHAnk YOU enouGh. Yet again to the GENTs laying IT dOWn every niGHT...words chan`t express my gratitude. The best In the business. You can`t beat it with a stick! Hey U lOOk uP heRE. "

"I had the privilege to see all three shows at the Classic Center and all three were equally amazing but this night was especially special. Vic Chestnut and John Keane were incredible. Then the cream of the crop was getting the postcard>porch song finale. You should download all 3 shows!!"

"04/25/07 The Classic Center, Athens, GA 1: Thought Sausage, Machine > Barstools and Dreamers, All Time Low, Bear`s Gone Fishing > You Got Yours, This Part of Town* > Aunt Avis** > Protein Drink** > Sewing Machine** 2: Old Neighborhood > Disco > Love Tractor > Contentment Blues > Greta > Cream Puff War > Nobody`s Fault But Mine > North > Chilly Water E: Can`t Find My Way Home > Postcard > Porch Song * with John Keane on Pedal Steel ** with John Keane on Pedal Steel, Vic Chesnutt on guitar/vocals [Thank You Falletten Me Be Mice Elf rap during Barstools] The Classic Center is such a beautiful venue, if not the most understanding about folks partying. I saw many people booted from the show for smoking, and security told me the band put down a substantial deposit so people could bring beers back to the seats during the second two nights. Thank you WSP!!! For me, seeing WSP in Athens was akin to seeing the GD in San Francisco. Hometown Team baby! The TS opener was nice to hear, and they jammed it out fairly extensively. The heat really began with the Machine > Barstools with the TYFMBME rap in the middle. Jimmy is obviously very comfortable with Machine at this point, and has each transition down perfectly. JB put the crowd into a blissful mood with the rap in Barstools, with the crowd cheering the familiar chorus. Goose pimples! All Time Low was great, flowing into a superb Bear Gone Fishin > You Got Yours. Then John Keane came out and the boys launched into a killer This Part Of Town. What is great about Jimmy with WSP right now is that he really is starting to understand the flow of the songs, which enables his melodic sense to take over during songs that require the dark and the light of his guitar’s tone. When Vic Chestnut came out (YAHOOO!!!!) and the boys jumped right into Aunt Avis > Protein Drink > Sewing Machine the crowd got their view of Jimmy’s special talents in this area. The 3 songs could not have been more beautifully done, and to see Vic up there with the boys was one of the highlights of all the concerts I have seen. The guitar lead to Protein Drink and leading into Sewing Machine may be some of the dirtiest, meanest, and downright awesome music I’ve ever heard out of this version of Panic. I think it needs to be in the rotation…permanently. Jimmy and the boys loved it, with Schools doing the hair flip move while standing behind Vic pounding his bass to end the set. Set break consisted of going outside to the courtyard on the right side of the venue to fight the beer line and sneaking some smoke while in it. Set 2 Old Neighborhood kicked on as we were walking back from outside to our seats. Nice solid version, directly into Disco!! Disco smoked as usual with Jimmy really feeling the groove of the song, and it lead into a great Love Tractor. The Tractor was sick, with the usual crowd involvement up a notch more than usual. Next up on this fine menu was some chicken with Contentment Blues. I’m not a huge fan of CB (gasp!), but it was a good version, and nothing the boys were doing was disappointing on this night. Good Greta, if not a little short, and an excellent Cream Puff War. I never can remember that it’s CPW when I hear it with WSP for some odd reason. Then they kept on flowing right into Nobodys Fault but Mine, which I have not heard them play since before Mikey died. I love hearing them play this song because for some reason I always think of it as a GD song, even though it is not. They do such a sweet job with it, and JB really seemed to feel this one as he was singing. North was an absolute MONSTER. Excellent version with Jimmy soaring to ultimate heights, making the PRS sing with such a stellar tone. They went right into a strong Chilly Water, with people obliging tossing water everywhere, and driving the crowd to a frenzy. The security guards did not appreciate this at all. The encore of Can’t Find My Way Home > Postcard > Porch Song could not have been more perfect. I’ve been chasing Postcard for approximately 10 years, and I got it in their hometown, and it was perfect. Just like the rest of the show. Great job boys!! Thank you for such a great experience!!!!!"

"Best show that I have seen since Mikey`s passing. I highly recommend you buying this show. And that`s all I have to say about that."