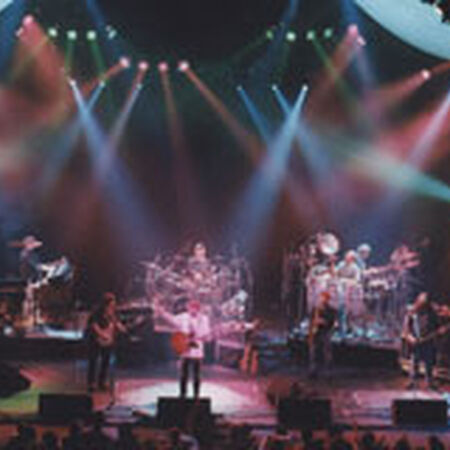 For the 12th Porch Song release, we go South.  The four-night New Year’s run in 1997 at the Fox Theatre not only ushered in 1998, it also gave us our first show of 1998…and also the last show in the states before Widespread Panic took off to Australia and Europe…to come back for some Panic in the Streets in April. The decision to spread the four Fox shows over five days was genius…build up to New Years, take a night off on New Year’s day to recover from the celebration, and then gather again on the 2nd to see what happens.  Well, what happened was just another incredible Widespread Panic experience.

Coming right out of the gate with “Tie Your Shoes” set the stage to be “…fully whelmed,” as JB put it. And by the end of “Tallboy,” as they were headed into “Hatfield,” it’s already 20 minutes into the show and guess what? It’s on! A completely unexpected “Dear Mr. Fantasy” out of “Happy Child” gave a mid-set punch that just kept everyone moving forward…even the re-start of “Gradle” is first class. And of course a “Sleeping Man” kept the energy flowing. With Count Mbutu sitting in on percussion since the beginning of the show, the stage was set for more guests to join the boys…after all, it was still a New Year’s run. Next up was Jeff Mosier on banjo for “Chunk of Coal” and, then for the first of a multitude of times over the next 15 years, Randall Bramblett joined in on saxophone for “Weight of the World.” But the music wasn’t done quite yet…as “Worry” took the closer’s role to round up a fabulous first set at the Fox to begin 1998.

Second set. Whew! OK. Ready. Keeping it familiar with “Ain’t Life Grand” was a great choice to get us all back on the same page before sending us out into orbit again.  Dropping into “ Contentment Blues” and then “Postcard” totally put the band and the crowd into full flight mode. With the aforementioned guests seamlessly moving in and out of the mix over the rest of the set, “Jack” gives way to “Airplane” with the seatbelt light ON for the “Take Off Jam.”  From there, the mid-set surprises kept on coming with a “Low Rider” out of nowhere that took off toward the “Drums,” but took some nice twists and turns to get there.  Out of “Drums” came that familiar “Guilded” beat that walked all over us before leading us all to a celebratory “Space Wrangler” which completed that stage of the journey.

From the first note of “Low Spark” to start the encore, we were once again reminded that this was indeed a New Year’s run and the show wasn’t over.  By mid-song, Colonel Bruce Hampton appears on stage and the band takes a perfect turn into “Time is Free” before heading back into “Low Spark” to end the show. Throughout this performance, Widespread Panic is patient as can be…no hurries…and no worries…except for that first set closer! And with a crowd thoroughly ready to rock even after a three night start to begin the New Year’s run, our little get together truly got it together. Considering we had “The best bunch of people anybody could imagine,” as JB closed it out, how could it have been any different?

As always, keep in mind that when listening to these Porch Song releases, what you’re really hearing is a recording of what came through the house speakers the night of the show…so there is no post-show engineering opportunity to dial in each instrument and vocal to perfection as there is with the Widespread Panic Multitrack Releases. What you’ll also find on these Porch Song recordings is the occasional digital noise or static resulting from the onstage recording process and/or the ravages of tape degradation. In this 12th release, we’re stuck with a show that’s pretty damn clean…but to get there…as always, we’ve preserved what we could, doctored up what we’ve been able to…and, in this ongoing process, refuse to let a random blemish prevent the spreading of this amazing music.  So, sit back, settle in and let this band take you on another incredible journey.

"As much as any "official" release, this captures the apocalyptic immediacy of Widespread Panic in the late 1990s - especially on the destination/holiday multinight runs they turned into an artform during that time period. Toward the end of the second set and into the encore the music takes on a sort of End Times drama. They're playing these songs not only as if it's the last night of a big run or the last shows they'll be playing for a few months, but like they're the last songs the band ever might play, or the last songs any band might ever play because after this the whole concept of live electric music might be rendered moot as an art form. Anyway. Highly recommended."

"Well put Horace! One of my favorite New Years runs for sure. I remember leaving the Ga Terrace with my tix from mail order for the 3 nights. I crossed the street and there was a Dud saying he just bought tix for 1/2/98. WHAT! I went over and grabbed 15th row DFC! I taped all 4 nights as we clamped to the front of the balcony. I started my DAP!, and headed for my seat. BTW, my seat never saw my ass, as I was on foot dancing all night. I got this email at 1:40 am last night as I was taping and ztreaming at the Peachtree Tavern. With me as a guest musician, you guessed it, Jeff Mosier. I showed him the email and we both said, "It's hard to believe it's been 14 years"!"

I Walk On Guilded Splinters 841