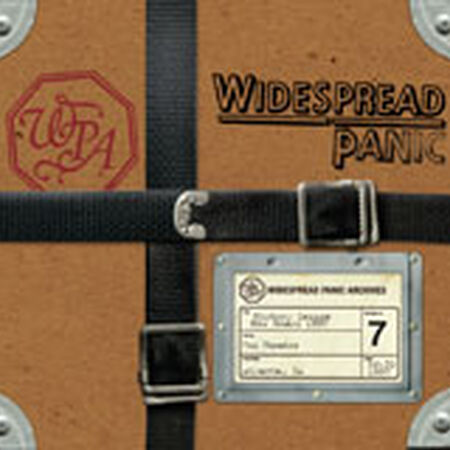 History Lesson New Year’s 1997, Widespread Panic’s first set of the New Years performance presents a ‘history lesson’ on the band’s formation, sequentially introducing each band member with a song that uniquely represented the time frame at which he joined the band.

John Bell begins with solo arrangements of “Coconut” and “Let’s Get The Show On The Road” just as he did in bars and parties around Athens in the early 1980’s.  Mike Houser joins Bell with “Wish You Were Here,” (a song that at the time, the band hadn’t played in over 1,200 shows) thus, beginning their long time collaboration.  Schools’ then joins the band and adds the bass line to “Stop Go”, and by the time Nance steps into drums Widespread Panic is ‘officially’ a band (1986) but not yet complete. Domingo Ortiz adds his percussive influences to “Ophelia,” (which the band hadn’t performed in almost 1,000 shows) and finally, Hermann works his way into the set and the band on keyboards with “Junior,” to complete the lineup that took the band all the way to 2002.  Recorded by Danny Friedman in a multi-track format on December 31, 1997 at the Fox Theatre in Atlanta, GA and then mixed and mastered by Drew Vandenberg in 2011 at Chase Park Transduction studios in Athens, GA.

"Amazing set. Anyone know why “Wish You Were Here” won’t play.? "

"This is a sweet release. For those of you who have complaints about not having the entire show, while I share your frustration somewhat (I was at this show too, and want it as bad as anyone), please consider this: perhaps the remainder of the show - namely, the 3rd set and encore - does not exist in releasable quality, or does not exist in the archives at all. It happens sometimes (10-30-97, for instance). The second set was already posted at http://widespreadpanic.com/archive/2011/10/archive-podcast-75-for-the-week-of-101211/, so go get it (for FREE) and be thankful that hard-working tapers captured the 3rd set and encore for us all to enjoy in audience format - again, for FREE. Consider further all the money you may have shelled out on tickets, hotels, travel expenses, mind-altering substances, etc. over the years, coupled with all of the HIGH-QUALITY, 100% FREE music we have had at our disposal for so long, then please re-consider your complaints and give thanks for what we have: an awesome band that busts their ass and does in fact value and honor their fan base, a killer archivist who does the same (thank you, Horace!), a great and loyal fan community, and a huge treasure trove of easily accessible, no-cost soundboard, audience, FM and matrix recordings spanning 25+ years that will allow us to enjoy the music (whole shows or not) for the rest of our lives and beyond. I, for one, and grateful - cheers, everyone!"

"I have had an aud of this show for a while now...since spring of '08 and agree with the symbolic first set...GREAT IDEA! However, the rest of this show is a RAGER!!!Please release the rest of it. Guys, 9.95 for a set of 7 or 8 tunes seems like a really bad deal when you get entire 2 set shows for a dollar more. Please KICK THE OTHER SETS DOWN!!! I WILL GLADLY PAY THE MONEY!!! Peace...."

"I was so excited to see this release, I bought and downloaded the show before I realized it was just the first set. Please release the rest of the show, or if that is too much to ask how about the whole 1/2/98 show ?"