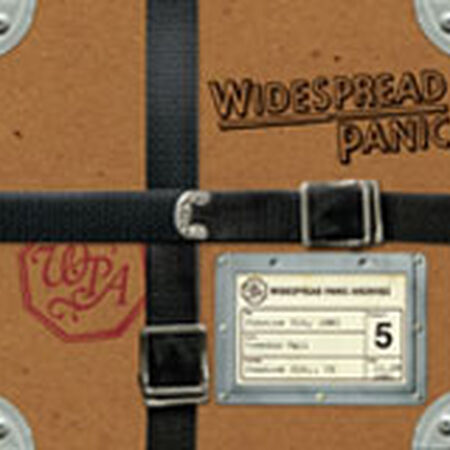 With the official Widespread Panic Archives release of Johnson City 2001 that night’s performance continues to take us everywhere….with old tunes, new tunes, borrowed tunes, blue tunes…and even a “Happy Birthday” for Todd.  Straight from the “L.a.” opener, this show just wasn’t in a hurry. And to quickly prove it, “Ain’t No Use,” “Impossible,” and “Worry” all realized their opportunity to stretch the body and mind before the band gave everyone a chance to catch their breath with a rare rendition of the previously unreleased “New Blue.”  After instantly finding the 2nd set groove with “Weak Brain”, the relatively new “Old Neighborhood” and the always-welcome “Trouble” continued to exhibit the night’s patience.  From that point, this show just didn’t stop or disappoint….with creatively inspired renditions of “Love Tractor,” “Pigeons” and “Airplane,” and even an all-out bass-driven “Astronomy Domine” jam out of the drums.  Mikey put his idyllic touch on the evening with “The Waker” before the band finished up the second set with “She Caught the Katy,” a tune normally reserved for sound checks.  The first of the night’s two encores was certainly fit for a Tuesday with “Gimme” before they finally sent everyone off into that cold Tennessee night with nothing but a “Chunk of Coal” and, of course, a smile on everybody’s face.

"Man i remember walking into this shitbarn living in Boone it was close and it was smoke. My best buddy i miss dearlty on one side (rip. Dump) and my other best buddy on the other and we may or may not have had cocks out rocking so hard. This,was in the reggae era,and youll find some in here but the rock is,strong i mean. fucking impossible>worry first set. if my cock wasnt out im dissapointed in myself and my cronies."

"The true meaning of "An honest tune". Legit! Panic in their heyday; before the buzzards and the bandwagoners....the pimps, the pushers and the prostitutes. What a shit show the last 10 years have become. Thankfully, the legend lives on. Right here. Have you really ever heard such a soulful, down home, grass roots, play it how it feels kind of sound? Put this 24 bit in your system and crank that shit.....LOUD! It's never been the same. Nor will it ever be. "

"I've been listening to live panic recordings for 20 years and this is, without a doubt, the highest quality and sound i have heard. Thank you and please please keep the 24 bit archive releases coming!"

"What an outstanding, relaxed show! The archives always bring the heat! Thanks to all involved, it sounds incredible."

"I want to extend my sincere thanks to all involved with putting out these unbelievable releases. Mikey lives on! The New Blue is so sweet...I am listening right now and I have a lump in my throat."