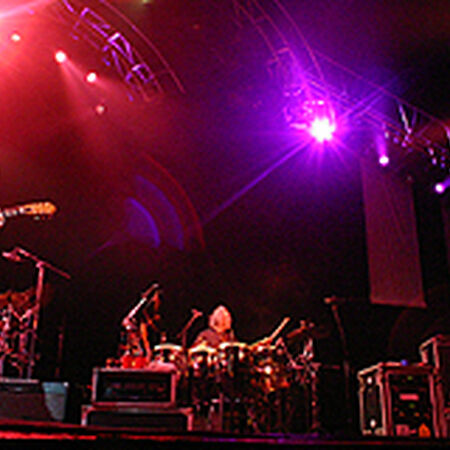 "This was also my first panic show. I stood in fromt of schools for most of the set. Highlights for me were Henry Parsons Died and travelin light. Great show, i really liked being able to move around freely and burlington is such a chill city."

"Ok i have seen panic a lot all over the country and going to school in vt i was pumped when there where comin to town. I put my self front row against the gate right in front of JB and it was definatly the best show ive ever had."

"Great show and my first seeing Jimmy on guitar wit hthe boys. The WOTW was absolutely stellar, as was the entire show."

"Believe it or not this was my first Panic show...What a way to celebrate the big 42. I really enjoyed the sounds and the band. I`ve always thought the rythm section was solid as a rock and I wasn`t dissappointed. Todd is a solid meat and potatoes drummer and holds down the foundation for some great music. I hear so much about the Jam Band movement and all these kids trying to Jam. How can you be in a Jam band without any history behind you...these guys have the History and the know how. I didn`t think the jams in B-town were overblown...I thought they were just right. Jimmy Herring is a great addition and will come into his own as he plays longer and familiarizes himself more with the music. It must be tough to walk into a situation where the set list changes almost nightly. That`s a lot of ground to cover. I thought, for being only the 3rd show of the tour they did very well. I was really dissapointed with the turnout...WSP deserves a much higher place in this crappy-assed business. Maybe when the kids stop running the record companies we will start to get back to what real music is all about instead of this MTV shit they keep shoving down our throats.......LONG LIVE WSP...a new and now loyal fan....Eric"

"Only two posts for this show? Surely there is more to be said than that! Come on people, we want to hear it! "