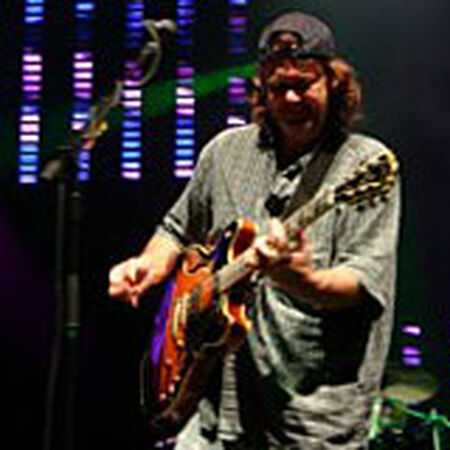 "It was a great show! My daughters first show at age 5. She rode around the place on my shoulders and everyone high fived her. Had great seats and ear plugs for her. We ended up on the lawn where she threw glow sticks around with another girl. The bonus of this story was that since it was dads weekend her mother didn't know and was pissed when she found out! Ladies so you know I didn't take her to piss her mom off but it sure did turn out to be sweet!"

"Best WSP 2005 show I`ve seen. That Tie Your Shoes made my wife insist we go back to lawn. Intensity = Enjoyment. See ya at the movie theater. "

"I happened to be in the DC area for work Saturday and hustled my way just in time to drink a beer in the lot. Everybody`s right, the cops plain out sucked... I`ve been to some similar scenes in other "sheds" for other bands but this ranks in the tope three. I`ve seen Phish at VA Beach Amp and the cops were horrible, it wasn`t a good show either. With these dismal circumstances Panic played one hell of a show. I don`t get to many shows anymore, 3 panic shows this year, but this is one of my favorites. I gotta download this tonite."

"This was a great show! I agree with some other comments: sucky lot scene, over-zealous cops, traffic problems getting out. Nissan isn`t the best venue to see a show, that`s for sure. Despite all that and the embarrassingly low turn-out, the Panic still put on an incredible show. Papa Legba->Disco to start. How can that be a bad omen of things to come? The real first set highlight was the Tie your Shoes jam. This had everybody in attendance (or at least those standing around me) flailing around in ecstasy as they hit one peak after another. Dave and George were really clicking on this one. Ending the first set with Weight was nice too IMO. Second set Conrad, Pigeons, and Smokestack Lightning (!). I`d never heard them play that before. And of course the Love Tractor that had everyone screaming "yaaa---HOOOOO". While I don`t really see Give as a proper final song for the encore, they ended with it nonetheless. I`m not sure why people are saying this show is so short: it was two and a half hours with no drums. To me, it was nice leaving a Panic show wanting more instead of wishing it had ended 30 minutes sooner. I think this will go down as the sleeper show of the summer."

"Most DC locals would endure castration before ever going back to Nissan Pavilion. Panic is the only band that could get me to visit that hell hole. Ironically, the VIP parking lot is co-located with the Police substation at the venue, yet the police don`t patrol the VIP lot. Funny how the party lot is the lot where the cops are. Nissan Pavilion`s horrible reputation for traffic nightmares and police harassment explains why attendance was so poor for a Saturday night show. And poor attendance may explain why the show was so short. I didn`t think the sound quality was bad, but I was down front most of the night. The performance itself was quite good although as set lists go, this one unfortunately contained quite a few of my least favorites. But hey, that`s why you go to the next show, right? Nissan Pavilion is quite possibly the worst shed in America. With so many venues closer to DC, I hope Panic decides to choose one of them before ever going back to this dump."