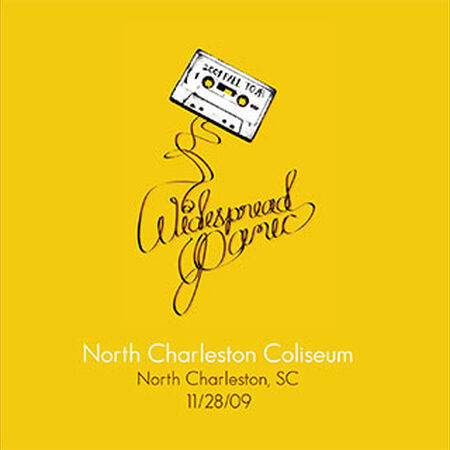 "Came out from Oregon(fan since 87' OCF show) to get the full Southern family experience and was BLOWN AWAY! Great people, fine venue and they played everything I was hoping for. The best was dancin' with such a luscious Belle. Haven't quit playing the show over & over. Wish I could make Atlanta.I'll be back yall,thanks for the fine Southern hospitality."

"This show simply SMOKES !!! No, I wasn't there, but after listening to Z-man's pull and then the Live WP SBD, I can easily say it is one of the best of 2009 - The Boys seem to LOOOVE playing in N.Charleston,S.C. b/c they alwaaays seem to throw down there + they REALLY know how to end a tour on verrry HIGH note to send all of the lil' "pilgrims" on our merry way back home to our 'normal' lives ! This show just riiips outta the gates with 3 smoking 'sandwiches' all in the first set ! The second set starts off with a flicka and then all hell breaks loose ... sh*t just LOOK at the setlist ! My personal favorite part of Set II is the run from 'Waitin' For The Bus' to the blaaaazing, bluesssy 'Jesus Just Left Chicago' ... then they slow down a minute with 'Crazy' (which, imho, is a GREAT song with great lyrics + I love the placement in the middle of the 2nd set) ... after a run through a very well-played 'Tall Boy' comes THE HEEAAAT !!! Its at this point that Panic just goes BALLISTIC !!! The 'Tie Yo Shoes' is absolutely ripped to shreds & then jammed out, for what?, 15+ f'ing minutes ?!?!?!! .... out of the 'TYS' jamming is a sweeeet 'Spanish Moon Jam' which eases a simply SUBLIME slow 'Porch Song' which smokes right into .... 'Arleen' ?!!! If I wasn't in full meltdown up to that point, this would have been IT. That place must've been straight blowing UP !!! Then they threwdown a kick-ass 'Junior' closer ! WHEW, WOW, WHAAAAT ?!!! After ALL THE SMOKE from both sets came a solid 3 song encore that kicks off soooo eeeaaaasssy & bluueeessssy with a Panic first and a personal favorite tune of mine 'ON YER WAY DOWN' ... "... you think its an honor just to have you around,weeell, its HIIIIGH time that you found, the same people you misuse on yer way UP, you might meet 'em on yer waaay back down" *Listen for a few thumpin' measures of, well, 'Ice Ice Baby' aka 'Under Pressure' ... what a great time it must've been to be there 'in the ether' of such a grrreat show, but ya cain't catch 'em all. Thank GOD, Praise JAH, ALLAH bless for Widespread Panic (AND ESP. TO ALL OF THE TAPERS WHO CAPTURES THESE PRECIOUS MOMENTS FOR ALL TO ENJOY) "

"yeah shoulda checked, spoke outta turn cuz I though I was special tehe"

"Don't mean to burst both your bubbles, but the 1st time Up All Night was played was Nashville 10/26/07. Check out Everyday Companion, if you know what that is. Rockin show boys!"

"hey man not to burst your bubble charelston but they first time they played UP All Night was in Savannah GA listen to the lyrics "laughin in savannah"? yeah i was there!"