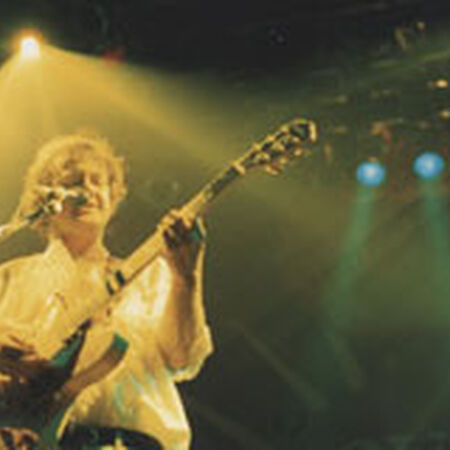 "....well I had been living in SLC from 92-June 97 and just said farewell to my amigos after Red Rock shows the days before. I was heading back to Buffalo, NY for awhile...When I left Colorado I had more tshirts that I made back in SLC. They were a take on Space Wrangler with ..'Ride Without Fear' on the back. When I found out they were playing in Omaha the next day, I sped there as fast as I could with my mountain bike on the rack in my VW Fox that was filled w' all of my belongings...after a day jamming to Counting Crows w 'Omaha' blaring while rolling through Nebraska, I literally drove into the parking lot while Galleon was just starting. WOW I was on cloud 9...I did not have a ticket, but somehow I got in just before my all time favorite tune kicked in, C Brown. OMG that was a bitchin 'life is the bomb' moment..my 27 year old ass with a bunch of homegrown Panic T's, on the sand, in the sun, on a volleyball court grooving hard to WP...It felt like I was at a random kegger with a bunch of friend's w Panic playing....and the whole setlist was gems o' plenty!....my adrenaline is pumping just writing about it....this show was really special, thanks guys. I am only one of a grand bunch of folks that your music has touched over many, many years, and for that I am grateful-Peas, Matt"

"i don't think these photos were from this show. i have the actual flyer framed in my office(if anyone wants a pic of it). if i remember correctly, they played on a flat-bed truck trailer with minimal lights and no screen behind them. i could be wrong. this show ranks in my top 5. played keno in the bowling alley bar and bought jb a drink before the show. miss you mikey <3 "

"I've waited many years for this gem. Thank you for choosing such a worthy show for release. Glad this show is getting some recognition!"

"Definitely Feelin' Alright after some '97 Panic. Keep up the great work!"