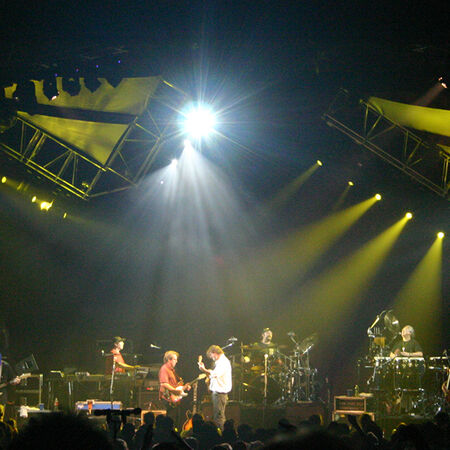 "The first set was no doubt the worst set of panic I've ever seen or heard even and the boys knew especially JB knew things were getting bad. Worst first set in wsp history but one of interesting second set with emotion and Sam Holt stepping up! The GIMME gavee the chills with meaningful emotion expressed through JB needing a hand from his ol' partner in crime! Yep, Sam Holt saved the show somewhat while George was en route to Oxford, Mississippi! Interesting time in the boys history. "

" I started seeing Panic in `92, & for what it`s worth,this show was not only historic,but it was a breath of fresh air when I walked in the show & saw something that we`d never seen before.It was different,& the band showed themselves as the professionals they are, rocking the Palace like many times before."

"I know this post is somewhat dated, but I felt I had to jump in after reading the other reviews when I downloaded this show. I went to this show and it was the first time I had seen WSP since Bonnaroo 02. Rumors were flying before the show even started and it made for an auspicious begining. Once the music started flowing, there was this quiet energy building. The first few songs were very well played, kind of had you in that spacey grove mode where you just kind of zoned out listening to it. When Sam came out, you felt things starting to take off. The second set with Sam on lead clearly had a an energy building...check out some of the work on Lets Get the Show on the Road...Sometimes showed some of Sam`s abilty to jam out, but the real energy began to build during the solos of I Am Not Alone, then exploded and blew the house during Chainsaw City...My mind was numb after that. Clearly anyone who says this is the worst WSP show ever just started seeing them last year and didn`t know that this is the way it was supposed to be!!!! My first show was in `92 and I can tell you that this show freakin` rocked!!! Get this download, in addition to some of the best guitar work since Houser, JB`s vocals are right on!! "

"Everyone who posted on here be sides Patfield is an idiot. Both Palace shows smoked. VT boy get your punk ass back to Virginia and judge every freakin` note played down in your basement while your mom is cooking my dinner. Some of you f*ckers are never happy. Bottom line 2 strong historical shows puttin` the wheels in motion. Satisfied."

"Sadly enough this was my first WSP show so I don`t have a reference for comparison, but it was highly energetic especially the 2nd set. It looked like lead guitarist try-outs on stage sometimes though, lol. No band needs more than one good guy behind that spot... but I understand their circumstances at the time. Herring should fit in well with Panics style. I`ve seen him with The Dead and other installments many times. He`s kindof a noodler on the strings but he`ll hit it here I`m certain."