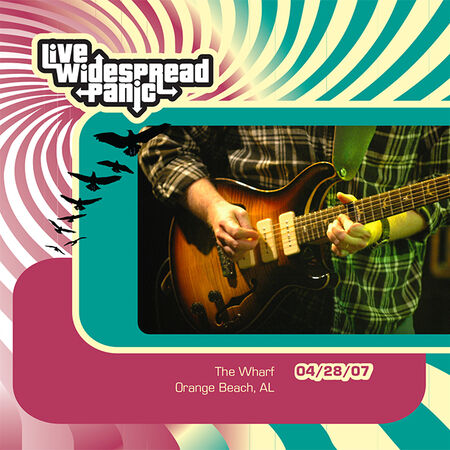 "Had a blast at the Wharf! Hope ya`ll continue to make it a yearly thing. That would be awesome! Thanks so much for Chainsaw City. It is my favorite!"

"I like your thoughts about the flag, but it always hangs at the Wharf."

"beav train, next time leave that dog at home."

"First off, let me say this about the 4/28 show...did anyone else besides me notice the huge garrison flag of the United States hanging on the left side of the stage? Does anyone recall the band giving thanks to the troops overseas who fight for our right to go see a Panic show in the South? They said it before the Saturday night show commenced...and I guarantee that Dave Schools and Jerry Joseph were the main reason for that flag and the heartfelt thanks that was displayed. I personally hung with both after a show in Charlotte, NC, at the end of a September 2004 Stockholme Syndrome show. The reason for the Stars and Stripes was a heavy military prescence in Orange Beach for the Mullet Toss, and the fact that a lot of the 10,000 in attendance were military personnel on leave or liberty, happy to see their favorite band rock and roll. Jerry Joseph and myself discussed elaborately the situation in Iraq, as it was my first "show" less then 24 hours after coming back to the US after a 7 month tour in Fallujah, Iraq, back in September of 04. The man respects us and he knows just like Schools who makes the sacrifices in our country. Jerry tells it like it is, and I believe he has the same vision as I do since his latest album is titled "April 19". Check out my April 19 rap and pics from Charlotte, NC, over at: http://www.myspace.com/michaelcampbell26"

"well we can`t all be aware of jerry`s favorite color...he is a great musician but does the little man have to act like that on stage(despite whatever upbringing he`s had) taunting jimmy on stage...we know they`re friends and all but what`s with the antics? "