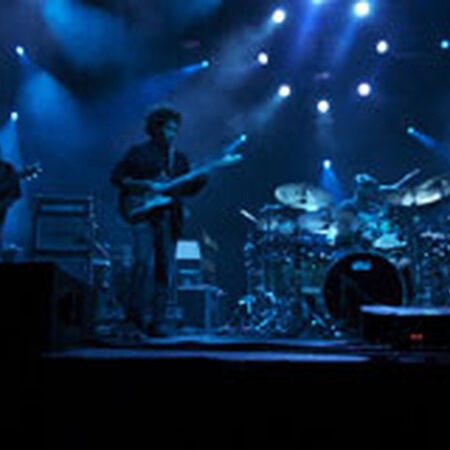 "ya, halloween show the night before was special with the covers and costumes. but,2nd night was INCREDIBLE as i remember. "

"what are you kidding? "Not quite the night before but still a hot show"....... WHAAAAAAAAAAAT THIS SHOW BLEW HALLOWEEN OUTTA TH WATER MUSIC ANDD ENERGY WISE"

"Not quite the night before but still a hot show. Red Hot Mama as was expected stole the show. Definitily worth the bills!"

"Best Show so far with Jimmy on Board! I loved the small floor, it felt nice and intimate. Met lots of cool brothers and sisters!! Thank YOU!!!!!!!!"

"Hello there to all you good Gonzo journalism followers. It all began at the Canal St. Hotel, where large quantities of Common Large Physilocibin mushrooms preserved in honey was consumed. Afterwards some nugs and a few pills accompanied by a Van Gogh containing a shot of absinthe, shot of vodka, orange juice (Vit. C) was in hand for the show. But upon arrival at the UNO Arena, the tickets had been forgotten at the hotel. The return round trip set back the Rolling Stone another $55. Selling one of the tickets at the gate redeemed $38. Upon arriving, many of the neo-hippy cult of followers ranging from the true hippies of the sixties to the fraternity and sorrority college freaks of the future breed of the new american dream had taken note of the good Dr. and offered a warm welcome. We were ushered through with a mild patdown, the kind airlines used to offer before this new age of global terrorism, (an excuse to rob the american citizens of liberty, justice, and total freedom). I entered into a whole fresh garden variety of pure unadulterated Gonzo. I was just another freak in the freak kingdom. I casually strolled along my people, the kind to finally bring justice back into the nation. "Five to One" an old Doors tune came to mind. Dumpster funk was ending their set when Jb announced his happiness to be back in NO. "Ain't Life gan brought a smooth entrance as the band inquired on what was our jobs and just what knowledge we were holding. A true statesman from Georgia as sincere as Robert E. Lee or Mark Twain. Mellow, soul grounding tones deeply took root in the soles of my chuck taylor converse shoes, I knew that familiar bounce to be the great joyful entertainer known as Dave Schools. This man is indeed a major part of the WSP sound, such as Richard Wright was to the Pink Floyd sound I had studied in the late sixties. Mind altering as much as the floating on a cloud of titties intense feeling that he slapped out of my mushroom induced mind like the strings he plucked upon that mighty bass guitar. Jerry Herring rose to and fro taking flight mind, body, and soul as they staggered like men on an ether binge into "Who do you belong to?". This power drummer of an unexpecting stature lay the extreme undertones to really wrap it all up tight as a vacuum sealed kilo of cocaine. The speed and rythm of a man who had just consumed as much as well. A small pause before "Heroes" allowed Mr. Domingo " Sonny" Ortiz to pop things into submisssion as he lay out the wonderful festive rythm of an ancient mayan drummer in anticipation of a human sacrifice, only the chosen one was himself as he lovingly shared his souls inner music. Onto John "Jojo" Hermann "Alredy Fried" sets a classic example of the roots under this wonderful pianist. I myself would love to have him walk into Woody Creek Tavern aand sit unannounced at our own upright and amaze the locals and tourists with a slice of heaven. I can see it all now. Now I am not sure if I heard the tones of Michael Houser swirl into the magical flow of delight, but I will always know in this old heart, that a piece of him is brought in each and every soul that enters the arena, each and every event. "Vacation" that was not on the set list, which when played live brings more of his energy and glimmering sound into play. We must never forget that Houser was the driving force even into transcendance into the cosmic City of Dreams, his wishes continue the band and the spirit of these fine young men who "Spill their juice each time they offer that warm welcome until thier final goodbyes and farewells until next time. Be careful boys and may you have warm welcomes, good health, and prosperity of soul. H.S.T. Associated Press Dr. of Journalism & PURE GONZO Chaneled through Treavor Williams Mobile, AL"