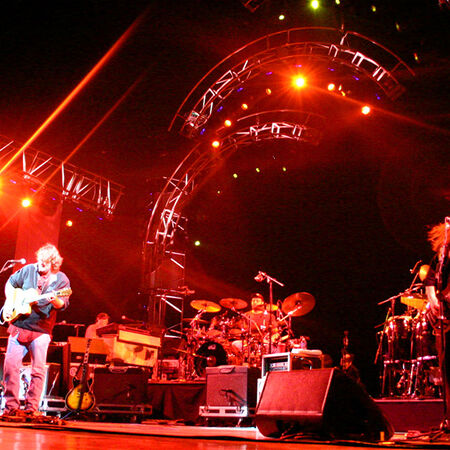 Let's Get Down To Business 351

"7-24-7. Gimme the Inter-Continental, which was formerly a Park Hyatt, right next to Nakatomi Plaza ("Mem-or-ies, bah dah dee dah - dah dah dah..."). "Stuck Down In Century City." Originally given room 330. (Hot damn friggin` cool.) But that arguably superstitious room had way too heavy a cigar odor for a fully packed, scrambled, and moving beardoo, dude. So I requested a transfer. They gave me 915. (Damn, should have gone to Vegas.) I`m in the euroasian tranced-out bar drinking a pinot noir called Carmel Road from Monterey County, 2005. Maybe three glasses, maybe more. On that note, where the damn hell is that county line??? But this is how far I could make it tonight. And just wondering, pondering WHEN we might hear that jazzy instrumental in The City of Angels... "

"Great Shows!! PANIC definitely had it going strong both nights! Herring has added yet another new taste to the band. Red beans encore, lets get down to business opening, second skin, the take out, just to name a few. The beans definitely ended the night off great just to come back the next night for a great show (riders on the storm was great, the crowd looked like something out of the Doors movie) It rocked!"

"The show on 9/29/06 was absolutely the very best of WSP to date. I think with the addition of Jimmy Herring is what WSP needed to get the sound back that Mike literally patented. He can not be replaced but Herring brings it back into the circle with his own very profound and definite guitar licks. WSP is back in a big way. Now lets just see how high they will climb this mountain of music that has captured so many. I am a middle fify year old musician and seeing and hearing is believeing. This was a great show in every way. "

"Fridays show was great. Rebirtha ...... my god ain`t it wonderful. Papas Home, I could go on and on. Chilly water, Love Tractor, All time low, and Wondering where my highlights. I wasn`t able to make the second show. I keep reading the reviews and every one is saying how good it was. It`s kind of depresing. Although, this is my third show this year. Which is a lot for some one with no money. Up to a year ago I had never seen them live. But after my first show it was on like Donky Kong. It keeps getting better. If I could stay on tour, I would. Keep on keepin it on Widespread and I will keep coming to shows. All I can say is thanks. Theres nothing like looseing your face."