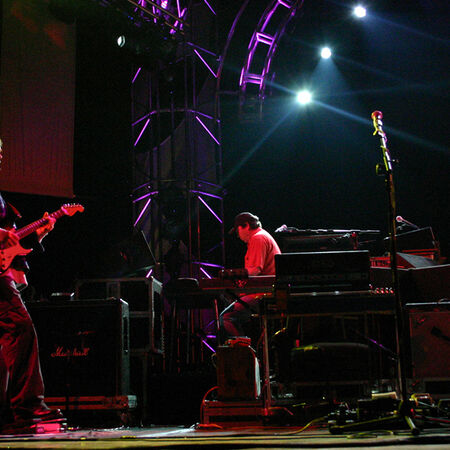 I Walk On Guilded Splinters 893

"The magic is blazingly hot..!!!! I have been to 20+ Panic Shows over the years and I have heard hundreds of shows on cd/tape. This one really shines. Anyone lucky enough to attend this show must have had a blast. I remember talking to Jerry Joseph years ago, outside the Dire Wolf in Whitefish, MT and I asked him about panic. I`ll never forget his statement that panic is really unique, because about 1 out of every 3 shows they play, the doors of your mind are totally blown off. The other 2 shows are rippin also, but that 1 out of 3 stat is amazing. I`ve found that to be true over the years. This show though, seems more like a 1 in 20 or 1 in 50 kind of overwhelming magic. It reminds me of the 7.9.99 show at BIg Mountain, in Whitefish, MT. Right from the start of the show, they continue to up the antie with each song, one right after the other and you start to wonder if they have the energy and the songs to keep the vibe going. By the end of the show, you`re not wondering any more. The Happy start has a beautiful sensuous section at the end and Jimmy is just laying out the sweetest leads. THis jumps right into North, with has the rippin intensity of a beautiful freight train. Next, the Big Wooly mammoth and WDYBT are really ripped up and sound totally unique, even though these are usually not two of my favorites and they tend to play them quite a bit. One of my favorite sounds coming from the band lately has been Todd`s snare. It is so definitive and exactly right where it should be all the time. (see 6/24/07, 1x1) Up through these 4 songs, your senses are tingling, not knowing what to expect next, and that`s when they drop one of the sweetest songs in their entire repitoire (IMHO). DOWN. nuff said. The dust settles a little bit and the sweet tingling strings of Driving Song keep your soaring spirit in flight. By the time they hit the first notes of Guilded Splinters, all bets are off. This is the SHIT! The set is wrapped up nicely with some Solid Rock to hold onto. The second set somehow continues to build and build. The Good People > Pigeons is absolutley definitive and I have listened to these two songs from this show over and over again. Play close attention to mr. schools during the transition between these songs. At the end of GOod People, schools starts playing around with the Pigeons lead and then they wrap up Good People. Finally, when pigeons peaks near the middle, mr. schools once again grabs hold of the funky lead and just melts the notes into your being. (If you love panic as much as I do.) The rest is hard to explain because the distance of mental / spiritual travel is getting so vast. Holden > Ride Me HIgh > Drums > Riders on the Storm > Arleen > Fishwater wraps up the set. Whoa. It almost seems that even with the first 7 songs of the show being so amazing and such a constant climb, building and building the anticipation, the whole journey was aimed at hitting Riders and just carrying everyone off into the land of morrison (jim). As far as I can tell, this is the best panic show that I have ever heard. Everyone in the band seems relaxed and energetic with a fresh new twist and a smooth electical energy. Usually, the shows that I identify so closely with are ones that I was at and then listen to afterwards. Tha fact that I was no where near this show and it burns in me so much says a lot for this unearthly band. nuff said. "

"What an awesome show. The mix sounds great and was well worth the wait. It`s been since late the 90`s since I`ve seen the band and the 9/30/06 show seemed like old times. Here`s a trippin` story I need to share with you all. I was listening to The Best of the Doors on my way to the show. I about pi%%ed my pants when Panic broke into Riders on the Storm. What a coincedence (it gets better). After the show and back at my Jeep in the lot I had to listen for myself to see what I was listening to when I pulled up. Sure enough, it was Riders on the Storm. What are the chances of that? I got goosebumps. Peace and Love All!! GTO-HJR@triad.rr.com"

"This show was the shit! Who ever did the final mix on this did one hell of a job! It was damn sure worth the wait! Keep on panic`in all the way to Atl!"

"Wasn`t there, heard all about it, thanks for getting this out and I don`t F*&^%&N care if it took six months, bunch of whining Puss`s. Jmmy is sick and JO JO`s on fire. Thanks Nugs for making my stay in Iraq all the more fun."