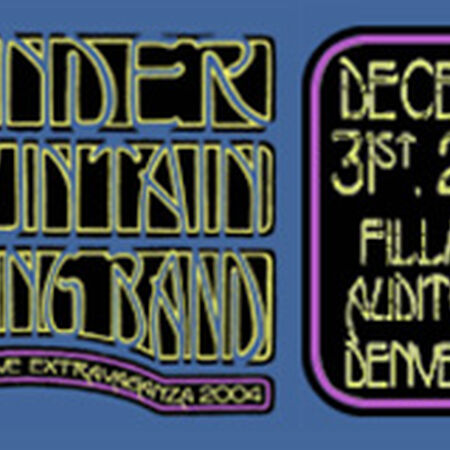 Hope in My Pocket 42

Looking Back Over My Shoulder 418

Everybody Knows This Is Nowhere 319

"I was at both of these shows and truly believe the first one was the highlight. Keller is ok, kind of a novelty for me, but a great musician. I don`t believe these were THE two best shows Yonder has ever played. The second to last show on their fall tour run at the ValAir Ballroom at this show beats it hands down. I was surprised to hear them sing "Ramblin` in the Rambler" because if you listen to the show from November, they say they are playing that song for the last time but then they break it out on the first night of the two show run. Confusing? Well, I would download this show purely for the ambiance of the night but if you really want badass, total Yonder shows, look up Yonder`s show`s at ValAir, Mishewaka, Bonnaroo, and other varieties from their home state of Colorado. I have seen them more times than I could count and this was an ok show. Hate to say that about my boys but someone needs to say it. The guests were nice, but sometimes it is nice to just here the boys play alone in the greatest moment of the New Year. "

"AMAZING!!! Came from upstate NY for the two nights. Expanded Sheriff Saga and a variety of other ymsb tunes mixed with high energy, beautiful venue, awesome people, stirred and shaken made for a NYE cocktail fit for psychodelic bluegrass heaven! Thanks Boys. "

"this show rocks, im listening to it now while i am in the process of finishing up getting it. i had plans to make it out to colorado this winter, but they fell through.. oh well, cant make every show, and alot of extra money to save for this summer....i cant wait:)! hopefully a 3 day run at the mish to start things off, then will definately make telluride and hornings this year:) peace, love, and kindness, corey ps. i highly recommend downloading this show, its great....wish i could have been there and thanks for making the show available for download. i also recommend 6.4 -6.6 at mish from last summer. they were smoking that weekend just like these two nights in denver. "

"couldn`t think of a better way to spend new years eve 04`...keller and yonder together was an undeniable phenomenon...all together the energy was just incredble...in regards to the dude above, i also was disapointed with the encore...i had no closure on the the 2 days, but other than that it was great...i think it may have had to do with the fillmore`s resistance to let them play longer or that dumbass who threw something at dave johnston...anyway awesome 2 nights, 2 of the best shows i`ve ever seen"