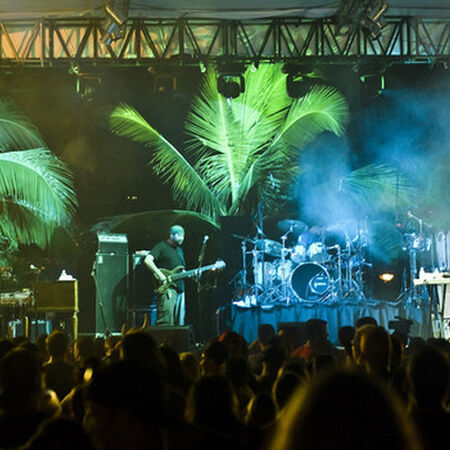 "not a bad show....the recording is kinda sketchy (during spaga, theres a few buzz outs and stuff). the music is great though!"

"`Letdown` must have forgotten to listen to the jake bolstered apaga>dribble madness. One of the sickest sit-ins I`ve ever witnessed!! This show was actually my favorite performance of the weekend by any band. Very cohesive, inspired playing. Cant wait for caribbean holidze 08!!!"

"If you like this show you are a dumb Bisco kid who will lap up anything that they do. They were all way to fucked up to play anywhere near good. This is a very sad show."

"like the rocky mountains -- it peaked and peaked and peaked and peaked some more. it. was. SICK. actually the whole sequence really never stopped peaking, barber just kept tearing it up and down whilst all the other 3 bisconauts kept straight killing it. Magner tore a rift into the Caribbean microcosm. Marc keeps bringing the dub bass mud like he loves too. Allen peaked right on que seemed to pick apart what Barber was doing like a surgeon. DRIBBLE. it kept going chorus>jam>chorus>jam>chorus>jam and back Such fancyass guitar was displayed there that it was almost too much, yet, VERY PATIENT too. it was contradictory barber pulls that off because one second he would be shredding it and the next he would be teasing you letting you linger on the pauses of his notes. Schizophrenic genius jamming--MINDLESS--. The patient jamming is really one of their best traits and it was brought out in full light here. The RLH drop was--I don`t even have words to describe it. IT WAS SURREAL. IT WAS EPIC. IT WAS MAGICAL. Each one of stepped up EXACTLY when they should have, but none of them over stepped their bounds. Great singing too. FUN as hell. Never, NEVER, since 11/19/06 THE FOX have i heard such a constant throwdown. i really hope this holds up superbly on tape and when you hear it, play it fuckin` LOUD. "