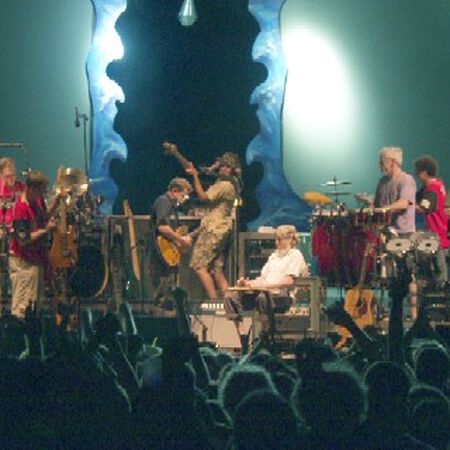 "Bam! kicked ass i like the show it was a nice soild set it has a great flow but there was some crazy guy by me trippin on sometin, but is all good the show kicked ass "

"I Saw cheese both nights @ Alexian Field, and WOW! Wonderful Weather and Music. UMPHREYS MC CHEESE BLEW ME AWAY! "

"Didn`t get to make it to the friday night show, but I still thought they played a solid show. But come on now...WTF!!!!!!!!!! Umphrey`s already had their moment in the spotlight, but they needed to close for Cheese. I`m pretty sure most of the crowd at this tour was there primarily there for cheese. Let the men do their thing!!!!!!!!!!!! Umphreys are amatuers compared to cheese. Hell I listen to the guys, but the mood of the crowd simply died after cheese left. The show just kinda ended when nobody wanted it to...they just left us hangin a bit...but we love you guys and you know this. Just keep doin what your doin (but add a couple more older songs to the setlists) and we`ll come."

"So new material is getting more play in these shows. I`m not used to them and don`t consider any o them epic (yet), but it is key to a jamband`s future to get a steady flow of new songs into the setlist rotation. If SCI can pull out 4 or 5 songs from One Step Closer (which they are well on the way to doing) then they`re in great shape. Shine>¡BAM! was a really good opener. Miss Brown`s with the sax was just straight up nasty (in a good way), the rest of the set was super solid, especially Texas. that was one of the most surging songs of the entire tour so far. Umphrey`s was cool but Billy Jean wasn`t what i was looking for as a closer. Once again a solid show. also, the shows in the big summer classic are not Cheese shows. they simply include a set of SCI and a lot of awesome collaborations. I love the entire thing... the idea behind it, the way it all came together, and most of all, the music. Anyone who has seen the band play a show when it`s just SCI can tell you it`s just different. I just don`t think you should consider these the worst sci shows you`ve seen. These shows have all been awesome."

"Sometimes a river is a great fucking song. I heard it twice too, so the fuck what! I would have liked more older cheese too, but if you thought shwagburg was awesome, then that was the only show you went too this summer and i`m sorry for ya. "