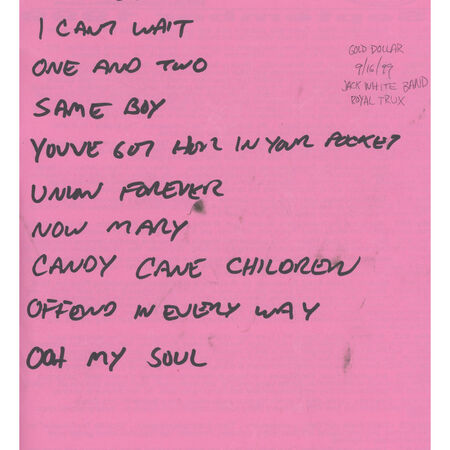 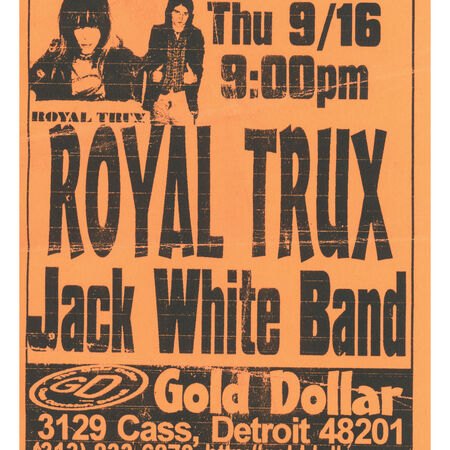 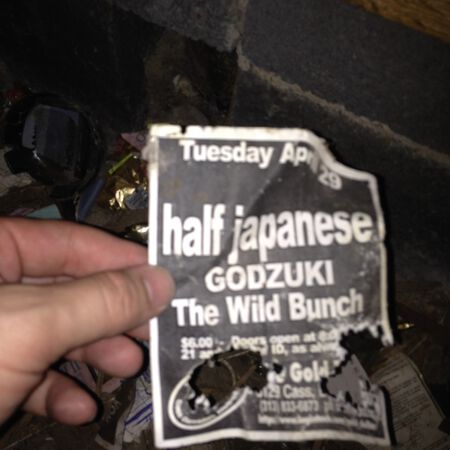 This show was performed by Jack White and the Bricks
Mixed by Joshua V. Smith / Mastered by Bill Skibbe at Third Man Mastering, Detroit, MI

Check out the full recap at nugs.net/blog

I was never legally old enough to enter the Gold Dollar when it was a functioning rock and roll club.

From my first visit on June 6th, 1998 (The White Stripes opening for Dura-Delinquent) until my final time through the front door on August 8th, 2001 (my band the Dirtbombs playing as a kick-off to a West Coast tour) I spanned the ages of 15 through 19. For insurance purposes, the bar was a 21-and-over establishment. But whether by carrying amps, playing the drums or just earnestly convincing whomever was working the door that I legitimately had no interest in consuming alcohol...I was able to see no less than two dozen shows there.

As likely the youngest person to have been a witness/participant in the music scene at the Gold Dollar...I am well aware that I was DAMN lucky to have done so. That may be the coolest thing I am ever even remotely adjacent to and truly embracing it I feel simultaneously both proud and depressed. Most people who peak as teenagers do so as some sort of high school football/cheerleader/big shot on campus bullshit...all things that I was expressly avoiding at that time. Yet, here I am, over twenty years later, still talking about the group that had a half-dozen mildly attended performances within a nuclear blast radius of each other, across five months of 1999 like it's goddamned "Glory Days" and I'm Bruce stepping back from the mic so that the crowd can shout along the words to the chorus.

Tony Soprano saying "Remember when is the lowest form of conversation" fucked me up more than any other dialog in my life. I feel like I am constantly fighting with myself. Fighting to appropriately appreciate and contextualize the past and at the same time, attempting to downplay it, hoping that I'm currently living something that will be worthwhile to recollect in another twenty years.

While I weirdly never felt like "The Bricks" (a name we'd never called ourselves and were never referred to as when we were actually performing) were a real band, I was, by far, the weakest player in the group of otherwise professionals. I had yet to join the Dirtbombs and prior to my gigs with the Bricks I had played MAYBE three shows in front of a crowd. One of those was a high school battle of the bands. Another in a bowling alley lounge. You know...inconsequential shit.

So while an audience recording of this show existed in tape trading circles since immediately after the performance, this multi-track soundboard recording proved revelatory in what had been unheard to my ears since that night. The opening of “Dead Leaves and the Dirty Ground” shined through with Brendan Benson’s striking countermelodies on guitar, all but nonexistent on the audience tape. When the opening lyrics came through I was confused…”Why is Brendan singing?” The delivery is unmistakably him, though through years and years of listening on a lo-fi tape I’d never noticed Brendan sang the first two lines…

Only to have Jack jump in, with gusto, guts, glory and the response to Brendan’s call..

When I hear your lips make a sound!

I’m not exaggerating here…when I first heard this, clear as daylight, I choked up a bit. I think it’s beautiful and feels like a truly moving moment just accidentally happened to be caught on tape that night.

Although I play drums here, I have few clear memories of what went down that evening. Royal Trux, the headliners, were late to arrive. I believe they showed up after we’d finished our set. My mom was there. It was a school night. I was seventeen years old. Pretty sure I got paid. That’s about it. My entire time in the band I was just making a very poor attempt to play drums like Patrick Keeler. Why I thought I could approximate his style is beyond me, and I often compare myself to Billy Yule playing drums in the last-gasp iteration of the Velvet Underground. I really shouldn’t have been onstage or in this band, but am forever grateful and happy that I was.

The setlist features a couple of songs that aren’t on the Bricks live recording from the Garden Bowl two months prior, which was released as part of Third Man's Vault #15 in 2013. “One and Two” is an original Jack White song that never ended up being used or recorded anywhere else, which is odd for him. I particularly enjoy the slippery bass playing of Kevin Peyok on this song and feel like he may well have been the glue that held the band together. “Candy Cane Children” feels odd outside of the context of the White Stripes, especially as they never really performed the song live. “Ooh My Soul” is sloppy sloppy sloppy and in my opinion, the first two chords presage what would come later via “Fell in Love With a Girl."

All my personal caveats aside, the show is a legitimately fun listen. That weird time in '99 where Jack just seemed like he had so much music seeping out of him that he had to hurry up and start ANOTHER band after the break-up of Two Star Tabernacle and his ousting from the Go...and that band seeming to be COMPLETELY different from either of those outfits or the White Stripes even. I can't help but stress here, besides "Candy Cane Children" NONE of these songs would've been considered "White Stripes" songs at the time of this performance. They were "Jack White" songs that hadn't truly found their form or footing in the duo format.

Originally included as part of our 27th Vault package back in the first quarter of 2016, the audio here is newly remastered by Bill Skibbe at Third Man Mastering...a facility only blocks away from the Gold Dollar address at 3129 Cass Avenue.

As part of my duties at Third Man Records, I was able to enter what remained of the Gold Dollar building on "official business" not long after the original release of this show. Clad in a hard hat and joined by folks representing the Illitch family that owned the spot...it was a sad collection of four walls, dirt floor and collapsing ceiling. The idea was to try and see if there was some sort of collaboration that Third Man could spearhead to rehab the building. But damn...all I could think of was that besides the walls, there was no "there" there. As someone who had MANY formative nights in that space and saw more than my fair share of transformative performances on that stage AND could possibly help revitalize it...I was unmoved. I'd rather let the memories exist as they were than invoke a Ship of Theseus experiment.

Though I did take solace in the fact that I had finally entered the building legally.

On July 22nd 2019, the structure would meet its ultimate demise in a suspected arson, the news of which no less than a dozen people felt compelled to immediately share with me. Developers reached out to me directly asking if Third Man would be interested in trying to rebuild/recreate the spot. Dare I even mention that there was talk of Third Man getting the building for a $1/year lease prior to the fire? And that we weren't interested then?

When asked by the Metro Times to comment on the fire at the time I said, "History like what happened at that club, for me, transcends the buildings it happened in. I'm sure there were probably at least five other fires in Detroit today that were far more tragic. Life goes on. This too shall pass. Memories are all that matter."

I stand by that statement. I think I was unemotional about the fire because I actually had the vague "closure" of being able to walk through that room one last time. Bar missing, mirrors behind the stage desintegrated, finally able to go backstage for the first time (no one ever told me there was a backstage!)...the only sign music ever happened there being a destroyed Half Japanese / Godzuki / Wild Bunch handbill I'd dug out from underneath where the security monitors were. Otherwise...it was just a space, empty for 15 years, left to the ravages of time and the elements and scrappers and squatters and in desperate need of being demolished. You know...a regular building in Detroit.

So here's to the memory of the Gold Dollar, to club owner Neil Yee for being wise enough to hit "record" so many times, to the sublime summer of '99, to peaking early, to electric nights of loose rock and roll, played for no one you didn't know, figuring it all out in the process, working on mysteries without any clues, crystalline and idealized in my mind, me unaware of how clueless I actually was at the time, feeling like there was nothing but opportunity, potential and promise that lay ahead.

While youth may be wasted on the young, why are teenage dreams so hard to beat? I think memories, true, deep, stay-with-you-the-rest-of-your-life-because-they're-fundamental-to-your-ever-so-fragile-sentience MEMORIES are only thrust onto those who are both sufficiently eager and receiving. Old guys who only talk about old times have closed off their receptors, failing to continue as memory collectors. Scientists say that humans aren't the only beings that recollect, that rats can have episodic memory, but I doubt those vermin are ever troubled by it. Yet the tenous balance between nostalgia and living in the moment shows no signs of subsiding in my consistently evolving superego...with all indications that my final actions, final words, and final thoughts on this mortal coil will almost certainly be some act of reminiscing.

I hope when I get older I don't sit around thinking about it, but I probably will.

"This is amazing! Candy Cane Children is still one of my favorite songs! Just saw Jack in Austin and he see still sounds the same. "

Dead Leaves and the Dirty Ground 206