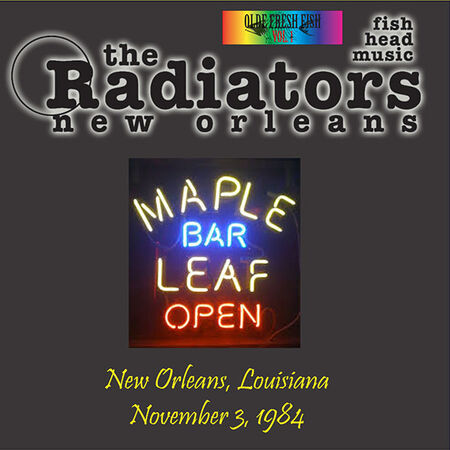 I Heard It Thru The Grapevine 302

Olde Fresh Fish Vol. 1 is the debut release of a series of re-mastered Radiators’ performances capturing the best of the early years of the band in the late 1970s and early 1980s before they busted out of New Orleans to play all across the nation for thirty-plus years. Vol. 1 was recorded at the famed Maple Leaf Bar in the heart of the group’s then-burgeoning fan base in uptown New Orleans.

During this era, the Maple Leaf was part of a triumvirate of music clubs that was a more tightly knit precursor to the Frenchmen Street scene familiar to New Orleans music lovers of more recent vintage. Centered around the late night shenanigans at the Leaf, the granddaddy of the three clubs and the only one still operating on a regular basis, the other venues were Jed’s (later known as Tupelo’s Tavern), a half a block across Oak Street from the Leaf, and Jimmy’s, which was three blocks away on Willow Street across from the streetcar barn.

Each had it’s own particular charms and drew a diverse clientele. The Radiators played regularly at all three clubs during a period when the band was averaging more than three gigs a week. It was not uncommon for them to perform an afternoon gig on the quad at Tulane University and then play three blazing sets at the Maple Leaf that evening beginning at the vaunted hour of 11:11 PM and lasting into the wee-wee hours before dawn.

This show is a collection of early originals played with youthful energy by a group on the edge of national fame including show stopping, epic opener, “Number Two Pencil” and the second set’s mystical closer, “Give Me a Rainbow.” It also includes a number of cover songs re-imagined in the Rads’ inimitable way including Allen Toussaint’s soul-searching “Life,” Van Morrison’s classic love song “Tupelo Honey” and Bob Dylan’s stirring freedom and redemption ballad “I Shall Be Released.”

"Rads in a legendary room! Set 2 is straight cooking! Slow Down!! Keep the Olde Fish Coming!"

"Classic Rads. As good of a show as there is. Enjoy."