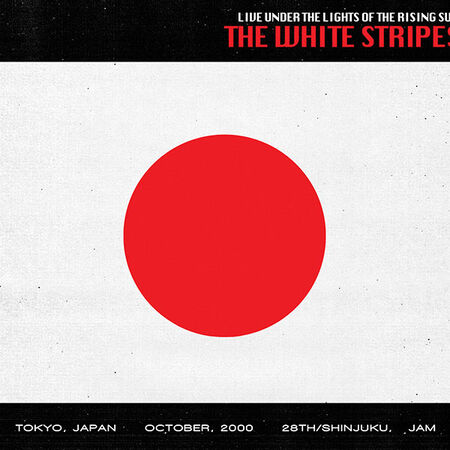 Your Southern Can Is Mine 129

Dead Leaves and the Dirty Ground 195

The White Stripes Live Under The Lights of The Rising Sun showcases Jack and Meg in their first overseas trip in October 2000. While the band’s two Japanese shows were far from sold out, the power transmitted by the band is captivating. These two live recordings contain the entirety of the White Stripes’ two Tokyo performances. With an on-mic shout-out to the evening’s headliners the 5.6.7.8’s, the Stripes would also cover that band’s classic song “I Walk Like Jayne Mansfield” in an improvised medley that also included Screaming Lord Sutch’s “Jack the Ripper.” Other highlights from the two nights include a rare cover of Iggy Pop’s “I’m Bored” as well as pre-White Blood Cells takes on “Dead Leaves and the Dirty Ground." Newly transferred from the original cassettes and given a fresh mastering, these recordings are sure to delight even more than they did upon their vinyl release back in 2014.