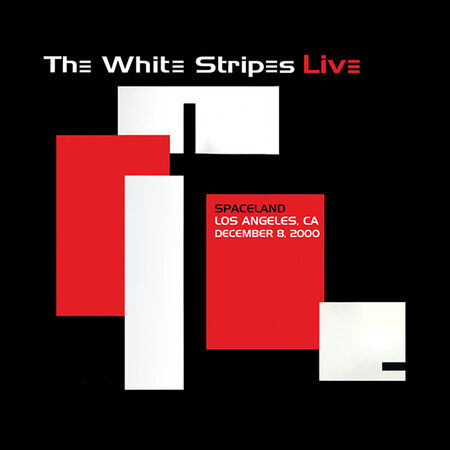 Twenty years and nine days after it happened, I could not think of a better way to wrap up our monthslong delve into the White Stripes live performances from the year 2000 than with this previously-forgotten recording from Spaceland in Los Angeles on December 8th.

The Stripes first played Spaceland a mere six months prior on June 22nd, having placed an early "hold" on the date at the club enabled them to negotiate a spot opening for Weezer (underplaying using the pseudonym Goat Punishment) in a gig I'm still kicking myself for not even attempting to record or film.
This, their second-ever trip to the West Coast, would be a quick jaunt right as excitement on the band was hitting a fever pitch. Reviews of this show at the time highlight a line around the block to get in Spaceland on this night.
And the show is strong...an inviting mix-up of songs the band had mastered and was flying in and out of sets by that point. Largely devoid of between song banter (save for Jack apologizing that his guitar broke the previous evening and that he cannot seem to make it be "friends") and not garnering an encore, I can only posit that the band felt this show was just okay.
Stripes tour manager John Baker recalls that following the performance, the soundman wanted to charge him $200 for a CD of the show. After a bit of wrangling, John was able to obtain it gratis and this gig, recorded directly to CD, is now remastered directly from that original compact disc master.
RIP to Spaceland, later known as the Satellite, which closed down this year and never opened back up. Completely unrelated to the White Stripes, but I have fond memories of running into Lux Interior and Poison Ivy outside there and, man, just saying that feels like it's something I'll be telling my grandkids like my mom tells me about seeing Pete Maravich play basketball or Elvis at Olympia or the Rationals at the Michigan State Fair.
There's still some other 2000 material stuff kicking around, some of it only just recently unearthed like this Spaceland gig, but for the time being, we'll consider the door closed on this year and will excitedly move on to other explorations.
For a review of this show at the time of performance, check out the write-up here...
https://razorcake.org/archive-white-stripes-12800-at-spaceland/

Dead Leaves and the Dirty Ground 176