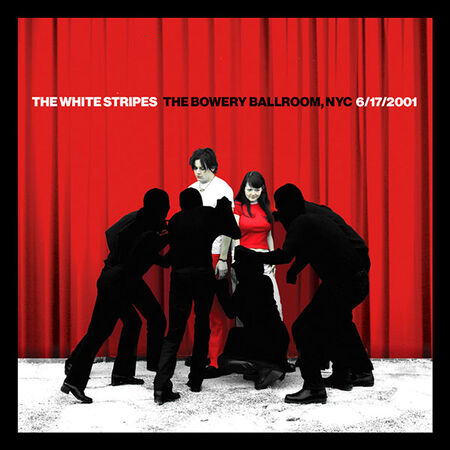 June of 2001 would find the White Stripes playing three NYC gigs in as many nights and the sense of impending greatness felt all but predetermined. The appearance of the likes of Kate Hudson, Chris Robinson, Jon Spencer, Vincent Gallo and PJ Harvey in the crowds at these gigs seemingly confirmed that.

All celeb-spotting aside...Jack and Meg were expressly feeling weighed down by the extent of their press and promotion duties. There's a photo taken during this time in NYC where Jack is wearing an otherwise plain white t-shirt that says "New York Confuses Me." Written (at his request) by Meg, the outwardly transparent reckoning of his mounting frustration with publicity scheduling seems almost quaint in hindsight.
The recording here from the June 17th second night at the Bowery Ballroom is a straight knockout...nary an errant move to distract from the supernova captured on tape, all inside a room that was clearly packed beyond its legal limit of 575 patrons. Twenty years to the day since its recording feels like as perfect a time as ever to share this corker with the world.
The opening five songs are unrelenting in energy and bombast...as solid a barrage of introductory rock and roll the duo would ever seem to muster. A curveball of a groove in "The Big Three Killed My Baby" unfurls at the 1:46 point and gives the song an impressive swing to it.
Seven songs into the set and finally the band plays something off of "White Blood Cells." I find this funny because at that point, I feel like the album was essentially "out there" and released in all but name. "White Blood Cells" was all anyone could talk about! But that delayed unveiling here is indicative of what I consider an extra-sensorily perfect pacing and song selection this evening.
Just barely audible here is Miss Guy (Guy Furrow) from the Toilet Boys jumping on stage unannounced (and uninvited) to proffer intermittent backing vocals on "You're Pretty Good Looking." If It wasn't explicitly called out here...would anyone have noticed or even known about these fleeting couple of seconds during the glory days of George W. Bush's first term? Almost certainly not. And that is EXACTLY why I mention it.
Later I dig how "St. James Infirmary" crashes into the set with a heavily-accented guitar intro, only to morph into a subdued electric piano variation on the theme.
The entire evening is charmingly ended with "Look Me Over Closely" and while you can't tell here...another fan crashed the stage to dance to the song and it took all of the band's collective strength to not make eye contact through the curiously interpretive movements.
Confused or not, the love New York city showed the White Stripes at this point was clearly returned in the form of as solid a performance from 2001 that a fan could ever hope for, not dulled or diminished at all in the intervening two decades.
- Ben Blackwell
×

The Big Three Killed My Baby 169

Dead Leaves and the Dirty Ground 186

I'm Finding It Harder To Be A Gentleman 172

Fell In Love With a Girl 75

Look Me Over Closely 163