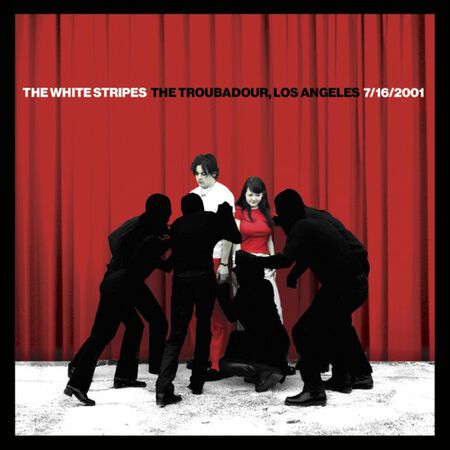 Read a full show recap at the nugs.net blog HERE

Not every show is life-affirmingly beautiful. Not every show earns a rosy summation with a tidy bow wrapped around it. Not every show is a game-changer. A lot of gigs are rough, a lot of gigs involve a struggle. A lot of gigs teach us about an artist in regards to how they react to adversity.
The White Stripes at the Troubadour on July 16th, 2001 is one of those shows where the disconnect is the likely appeal.
Around summer of 2001, a phenomenon started to become apparent in regards to the White Stripes playing two shows in a row in the same town. Two-night stands, as it were. For a reason that still seems difficult to pinpoint...the crowd at the first night of a two-show run would just be...dull. Still. Disengaged.
That was the perceived state of the crowd in Los Angeles that day. Before the Stripes even hit the stage, the attendees had not gelled with either of the two opening acts. That alone raised Jack's ire and you can hear it from the moment he steps onstage...barely any noise from the crowd and an immediate on-mic condemnation.
From there, the always incendiary "Let's Shake Hands" is outwardly even MORE so. Through "When I Hear My Name" and "Dead Leaves" the propulsion is strictly emanating from the attempt to inspire the crowd.
The accentented intro to "Jolene" is a nice deviation and inspite of the applause f, there was still a disconnect. In what I've titled "Hip Improv" here, Jack and Meg chug along on a straightforward "Boll Weevil"-reminiscent groove before Jack intones "Is this hip enough for you Meg? Ah! Can you feel the hipness blow upon you Meg? Come on now! Oh so cool, so cool. Oh so cool."
Jack's guitar fritzing out a handful of times here doesn't help. The aborted 13 seconds of "Astro" at the end of "Cannon" to me signify the band grasping at straws to try and break through to the audience.
The hot and cold version of "Death Letter" is further evidence of throwing it all against the wall in hopes that something sticks. Following the solid version of "I Think I Smell A Rat" Jack quizzically asks "So how's the movie? Everybody enjoying the movie?"
The blazing, 62-second version of "Fell In Love With A Girl" feels downright spiteful, especially in foregoing the final verse and chorus of the song. "Wasting My Time" seems like the title could be a manifestation of the feelings on stage at that point. "Southern Can" is tackled at an outright breakneck pace, possibly the fastest it had ever been played.
The protracted accents punctuating the middle of "Screwdriver" feel provocative, yet another attempt to draw something out of those assembled in the room that evening. Toward the end of the song, Jack and Meg are just busting their humps to improvise on the same page. They get there, eventually.
The intriguing part here is, in spite of all the friction, the show is a compelling listen. Thinking back today, I had NO memory of the audience that night. No remembrance of the struggle. No recall of a less-than-ideal performance. I had no significant recollection of the show other than the fact that I met Chris Pontius at the merch table while Eric Erlandson and Mike Mills were floating around the room as well.
Listening back 20 years later, my takeaway here is that whatever the vibe in the room may be at the time, in two decades time hardly anyone will even remember. If you remove Jack's banter here, it kinda just sounds like any other show from the same run. Ultimately, I don't even know if the feeling in the room even matters once the evening is over. All we will have is the recording, if we're lucky. Everything else is just perception, and perception is just a nine dollar word for opinion.

Dead Leaves and the Dirty Ground 196

Fell In Love With a Girl 65

The Big Three Killed My Baby 173

Your Southern Can Is Mine 93

You're Pretty Good Looking (For a Girl) 62

Look Me Over Closely 136