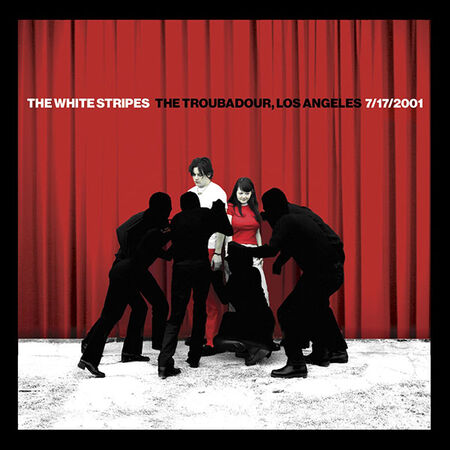 It'd be delusional for anyone to argue that the White Stripes gig at the Troubadour in Los Angeles on July 17th of 2001 was the primary focus for the band that day. Of far more intrigue and excitement was their mid-afternoon recording of a live performance at CBS Studios for the evening broadcast of The Late Show With Craig Kilborn.

So once THAT had commenced and the Troubadour confirmed that they could pull up CBS on the television behind the bar...the rest of the day is just a bonus.

Listening back twenty years later, I have to say that the show feels unmoored without a slide blues interlude of "Death Letter" anchoring it all. I know the band didn't play "Death Letter" at EVERY show, but damn, at this point in the career, it seems like it was all but a given.

So what a delight it is for off-the-cuff covers like Tommy Johnson's "Cool Drink of Water Blues" and Gene Vincent's "Baby Blue" and "Farmer John" by Don and Dewey all to sit comfortably among the standards of the era like "Dead Leaves" and "Little Room" and "The Union Forever." The accent-based "St. James Infirmary" is always a treat and anytime any song comes after "Boll Weevil" I consider that extra special.

The celebratory feeling of seeing Jack and Meg bash out "Screwdriver" and "Your Southern Can Is Mine" on Kilborn on the modest screen behind the storied downstairs bar was probably the last moment where I most truly thought "there's no getting bigger than this" for the White Stripes. And the fact that we're here, now, twenty years later still talking about and sharing these recollections is all the proof I need that the White Stripes are amazingly still relevant and, in many ways, still getting bigger.

The Big Three Killed My Baby 155

Dead Leaves and the Dirty Ground 193

Your Southern Can Is Mine 94

Look Me Over Closely 227