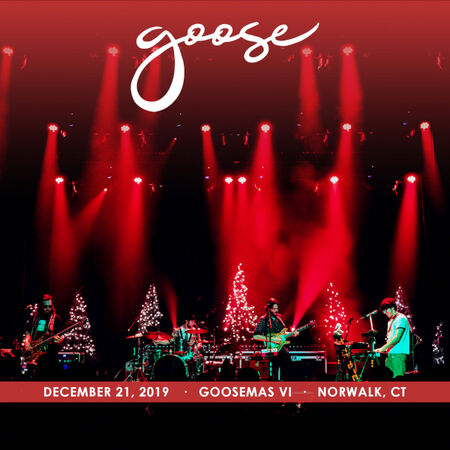 {1} The Band, FTP (First Time Played) as Goose. Snakes & Handini on acoustic guitars. After the song Handini aka WizKid plugged in the crowd mics so the band could hear the audience. This song was played at a Vasudo holiday show in 2012 at Factory Underground

{2} Tumble was the first song Rick wrote for Vasudo

{5} The Waitresses, LTP 5.18.19 at Domefest. This was the second song Peter played as a member of the band at his first show, Goosemas 4

{6} Vince Guaraldi, LTP Goosemas 2. At the first Goosemas this was played during all three sets

{9} Fake Snow starting falling over the band & crowd during WL, it was very ted

{12} LTP 5.2.15 at O’Neil’s, Norwalk, CT. This song has only been played several times in the band’s existence, as the band wasn’t ready to play it

{13} Went back into the second half of Wysteria, after the “Future” segment of the set. The opening lyrics to the second verse are “Returning from the future”. This segment also featured the Raffle Jam, Handini read the winners of the raffle from the canned food drive. He thanked the crowd & said “We don’t have time for an encore, so we’ll just keep jamming.” As the police were telling us to cut the show

"Rocked the rail in the back of the crowd with my crew and some newly discovered friends. Shoutout to Dick! Great show with some new songs debuted. Great gifts from the boys!"

Christmas Must Be Tonight 413