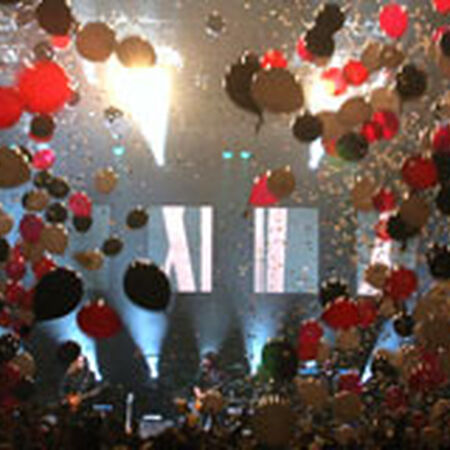 Due to renovation, the annual Mule year's eve show took place at TheHammerstein Ballroom instead of The Beacon Theatre. Set 1 got underway with Wandering Child and a danceable Slackjaw Jezebel. After Thelonius Beck, Temporary Saint and and Birth Of The Mule opened the door to About To Rage. SG in hand, Warren slid his way into Brighter Days and then announced the last Thorazine Shuffle of 2008.
Set 2 ("The Seattle Set") and played in its entirety with the help of Pete Thorn began with an unbelievable rendition of Rooster followed by the maiden voyage of Say Hello To Heaven. Pearl Jam's Black came next before making way for a beautiful telling of Nothingman. After Indifference, Fell On Black Days and Black Hole Sun both set the crowdablaze. Where Did You Sleep rolled into Auld Lang Syne as Warren and crowd alike counted in the New Year. To the popping of myriad balloons and the tossing of much confetti, 2009 began with a face melting version of Nirvana's About A Girl which was followed by Lithium and then Hunger Strike.
Set 3 fired up on all cylinders with a Danny Louis-less War Pigs that was beyond extraordinary. At Danny's return , the ferocious four launched into Afro-Blue and then two red hot tunes, Bad Little Doggie and Brand New Angel. Pete Thorn returned to the deck and brought along Kevin Kinney. This sextet launched into Drivin'N'Cryin's Straight To Hell which segued into Rockin' In The Free World to end an amazing set. As an encore, the Mule+2 returned and belted out a dizzying Can't You See.