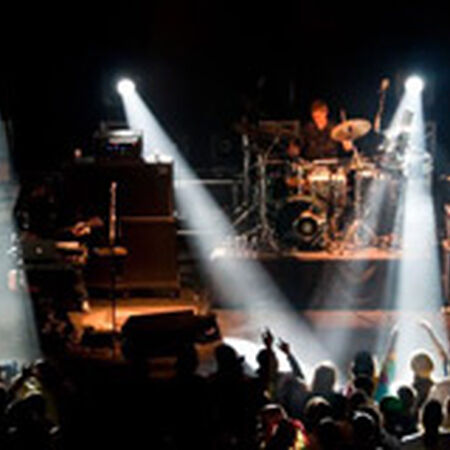 "kalamazoo! flew in to hop on a little midwest terr - end of October 2009, what a great time of year to kick off the leg . The state theatre might have been one of the coolest places to see a show, very ornate with statues and candleabras built right into the walls. lights and walls and altered minds. yes. A perfect autumn opening night for this little mini midwest run with the big Halloween show coming up in chicago.. After a great opening set by everyones favorite dj's, orchard lounge, and then a rare appearance by OTT !! the Biscuits took the stage and the place went bonkers. Spectacle is a rulin opener, especially with the long drawn out ambient opening sequence. Gotta be one of my fave songs and I actually for some reason had a big feeling they would open with it. uber glue>flash mob-were played perfectly and actually compliment each other reallly well - and showed that the new songs fit in perfectly with all of our favorite classics .Yes . the Little>svenghali>Lai lives up to how it looks - Little Lai jam = happy and shimmering into a HUGE<> om inverted svenghali - the second jam out of sven will mesmerize you as it may have before - it heads into dark er territory with its strong weird crickets and munchkin themes. they drop back into Lai and finish it up - and damn barber sounds so perfect singing this song, his voice is great. MORPH always rules, its one of their GOD DAMN Classics right?? brownie throwin down the bomb bass line 3009 - it will not let you down.set closer. word. note ::the intro to set two of this download has the end of OL's set:: ladies n gentlemen >THE DISCO BISCUITS> On Time opens set 2 and - live its dance party USA.love the song. ... I did miss tuphace a little as magner on the vocoder doesnt quite live up to the ep version, BUT it also did not matter in the long run because the whole crowd was singing the song anyway and everyone was GETTING DOWN. this song will be a fuckin monster live I predict - so fun. a note about the SPAGA - it will slay you. after the opening notes, magner throws down ,a classical piece ( chopin?) - it comes out of nowehere and with the blazing red lights blaring on us, well - it was quite a moment of inner space weirdness. you need this spaga. crazings righT??? you cant go wrong with the killer m80>run like hell>astro sequence, this shows us that m80 DOES have some balls and can be stretched out and fucking rock.love that song and hope it sticks around. brownie was going nuts during run like hell, he is so animated on stage -and just droppin bombs. when he takes hold of the jam like he does in the bitchin astro . aww yeah we close up with mulberrys dream - , and it was a great unexpected closer.and it rocks. classic. encore:: voices insane , one more freakout. its great when they play the perfect encore isnt it?? stumble to hotey.. you know you wont regret buying this board son. "