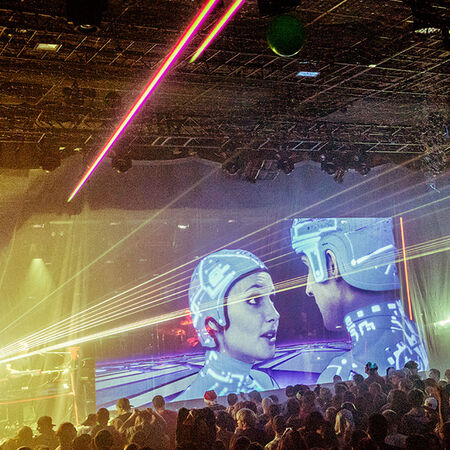 "New Year's Run 2015: Day Two. Let's see I've spent about 8 hours the last four days playing this monster New Year's Eve set. Of course the concert is 3 1/2 hours long with three sets, so I guess that's not that big of deal. Very good show for sure, but not a great one in my ears. "Little Lai" starts the whole shebang off on a nice note with some nice funky jamming, but the remainder of set one seems to get a bit to "raging" for my tastes. Set two starts off with the countdown version of "Hot Air Balloon" and of course into the New Year's Eve version of "Helicopters". The real gem of the set for me was "Pimp Blue Rikki" with a great jam of course. Set three is where things get really interesting. The band plays one of it's rare motion picture soundtrack experiments with an hour long run through the "Tron Jam", which was displayed on a screen in front of the band. While essentially this is an improvisation, it might also be the first piece of original music the band has premiered in quit some time. Nice piece as well with a nice buildup as you might expect, but at an hour long it makes it somewhat hard to enjoy. Overall nice show and I had a great time listening to it, but a favorite it is not. "

"Tron Jam and Techno I-Man 2 nights later is some of the best biscuits in years. "