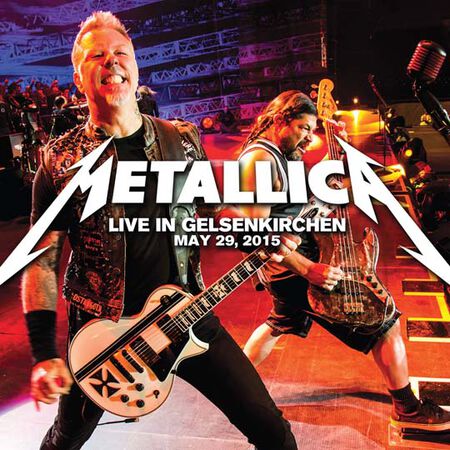 This was the third time that we have played a show in Gelsenkirchen, Germany. We last visited Gelsenkirchen on July 2, 2011 during a tour with The Big 4 and first played here on the Madly in Anger With the World tour in 2004. Germany has always been great to us by letting us visit 110 times since 1984.

“Fuel” opened the show for only the second time over the course of our career followed by “Bellz.” It’s the first time that those two songs have been paired up to open the show.

“Metal Militia” appeared in the third slot of the set. This was only the 10th time that we’ve played the deep cut from Kill ‘Em All since 2004. We last played it two years ago when we performed a secret set as dehaan at Orion Music + More in Detroit. Coincidentally, we played the song in Gelsenkirchen on June 10, 2004.

Following “Disposable,” we pulled out a true rarity by performing “The Unforgiven II” for the first time at a live gig. We had played the song once before at the Billboard Music Awards on December 8, 1997, but the song never found its way into our live set… until now! “Cyanide,” “Lords of Summer” and “Sad But True” followed.

We weren’t done with the rarities yet! We dusted off “The Frayed Ends of Sanity” for only the second time since it was released in 1988! We debuted “Frayed” in Helsinki last year during the Metallica By Request tour and had such a good time with it, we thought we’d play it again here in Germany.

After playing a couple classics (“One” and “Master of Puppets”), we played “Damage, Inc.” which, like “King” and “Disposable,” hadn’t been played in Germany since 2009. “Damage” hadn’t appeared in one of our sets since we played Melbourne, Australia on March 1, 2013.

We closed out the main set with “Fade to Black” and “Seek and Destroy.” Yes! You heard correctly! “Seek and Destroy” did not close the show! Can you believe it? We kicked off the encore with “Creeping Death,” then played “Nothing Else Matters” before closing with “Enter Sandman.” We haven’t closed with “Sandman” much over the last 10 years… the Stones show in 2005, Live Earth in 2007 and the Hall of Fame Anniversary show in 2009 are a few times off the top of our head.

Setlist at Rock im Revier at Veltins Arena, Gelsenkirchen, DEU on May 29, 2015

For Whom The Bell Tolls 278