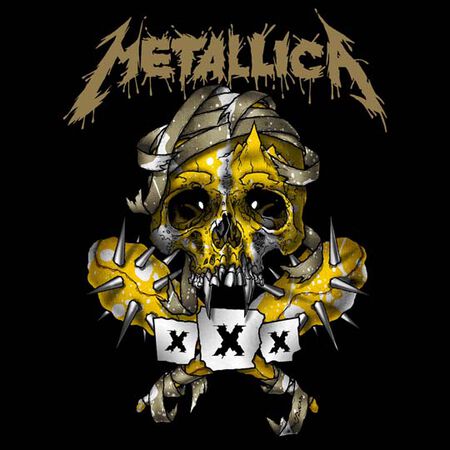 This was the second of four 30th Anniversary celebration gigs at The Fillmore in San Francisco.

After 23 years, this was the live debut of To Live Is To Die.

"Now that that's out of the way..." This was the earliest that Enter Sandman has been played in the set in quite a long time. June 23, 2000 in Seattle, WA seems to be the last show where Sandman appeared at the top of the set.

This was the first time in over seven years that Holier Than Thou was played in San Francisco. It was last played in SF on March 8, 2004 at the Cow Palace.

This was also the first time in seven years that the electric version of Disposable Heroes (not to be confused with the Bridge School '07 version) was performed in the Bay Area. It was last played in NorCal on November 28, 2004 in San Jose, CA.

This was the first time in eleven years that Bleeding Me was played in the Bay Area. It was last played in NorCal on April 22, 1999 in Berkeley, CA during the S&M shows. This was only the 15th time that the song was played since Robert joined the band.

This was the 37th performance of My Apocalypse since being debuted on March 25, 2009. It is the fourth least played song off of Death Magnetic. The only songs it outranks are The Judas Kiss (by a mere seven performances), The Unforgiven III, and Suicide & Redemption.

The boys brought up a MetClubber named Andrew Dowis for a smoking performance of Breadfan.

Marianne Faithfull joined the band on The Memory Remains. The last time the two performed the song together was on December 6, 1997 during a taping of Saturday Night Live.

Ray Haller of Sweet Savage sang Killing Time with the band. This was only the 18th performance of the song since it was debuted at Metallica's very first show on March 14, 1982.

Bob Ritchie, also known as Kid Rock, took the mic for a cover of Detroit-icon Bob Seger's Turn the Page. The Son of Detroit last sang this song with Metallica on July 16, 2000 in Phoenix, AZ.

Armored Saint's John Bush, the vocalist who the boys chased for years, finally got behind the mic with Metallica for a killer version of The Four Horsemen. This was also the first time in over 25 years that the full version of the song was performed.

Lou Reed joined Metallica for Iced Honey, The View, and a cover of the Velvet Underground's White Light/White Heat.

King Diamond, Hank Shermann, Michael Denner, and Timi Hansen... better known as MERCYFUL FATE... joined Metallica for the deliciously evil Mercyful Fate medley. This was the first time that those four members of Mercyful Fate performed together since 1993. Metallica last played the Fate medley with King Diamond on August 9, 2008 in Dallas, TX. This was only the eighth time Metallica has performed this live.

"Best part Lars "can you play shine on drums?". Greatest show ever."