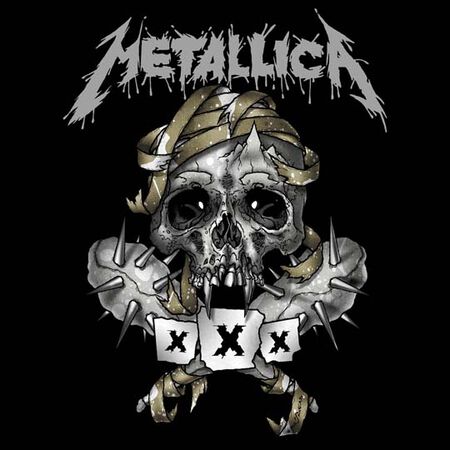 This was the third of four 30th Anniversary celebration gigs at The Fillmore in San Francisco.

This was only the second time that Suicide & Redemption was performed live. It was debuted on July 27, 2009 in Copenhagen, Denmark.

Did you know that Master of Puppets has been played over 1,375 times?

This was the first time in over 22 years that ...And Justice for All was performed in the Bay Area. It's last Bay performance was on September 15, 1989 in Mountain View, CA.

This was the first time in over 12 years that Of Wolf & Man was performed in the Bay Area. It was last performed in NorCal on April 22, 1999 during the recording of S&M.

The Thing That Should Not Be was only played 11 times during the course of the World Magnetic tour. Coincidentally, the last time Thingy was played in SF was on May 22, 2003 at... THE FILLMORE!

I Disappear was only played five times during the between 2008 and 2011. It was last performed in San Francisco on November 13, 2005 while opening for The Rolling Stones.

This was only the 13th performance of The Outlaw Torn. It's last US performance was on October 9, 2004 in Albany, NY.

The boys brought up a MetClubber named Joseph Guariglia for a great performance of Blitzkrieg.

Alice in Chains axeman Jerry Cantrell joined the band during For Whom the Bell Tolls.

Jerry also provided vocal harmonies during Nothing Else Matters.

There was not a safe goat in sight as Animal took to the stage for a razor sharp performance of the sweet, little Anti-Nowhere League ditty entitled SO WHAT! So What was last performed by Metallica on November 3, 2008 in Salt Lake City, UT.

This was only the fifth performance of Tuesday's Gone. It was last performed before an audience prior to the live taping of MTV's Reload, Rehearse, Request special on March 21, 1998. The boys were joined by Skynyrd's own Gary Rossington as well as COC/Down guitarist Pepper Keenan, Jim Martin of Faith No More fame, and Jerry Cantrell.

Headlights! Head on! Jason Newsted returned for the third night in a row, this time performing Fuel and Fight Fire With Fire.

The original Misfit himself, Glenn Danzig, joined the boys for a trio of Misfits songs. Glenn last performed with Metallica on July 3, 1993 in Tinley Park, IL.

The Thing That Should Not Be 481

For Whom The Bell Tolls 294