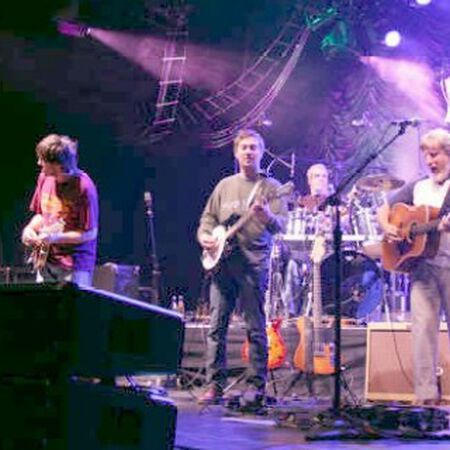 The Mighty Quinn (Quinn the Eskimo) 434

"I was not at this show, but all I have to say is WOW! This is a perfect slice of cheese. A bluegrass-infused first set. A seamlessly psychedelic second set. I loved the way they kept coming back to Eye Know Why and Sand Dollar. The segues are so tight, and the band is on fire. The Black Market > New Pollution is other-wordly, and the Up The Canyon sandwiched in the middle of Sand Dollar is super groovy. The set is nicely book-ended by Best Feeling and Rollover. Oh, did I mention the great Yonder sit-ins in the first set. Great show. Catfish John! "

"well well well tour time came around at last, this show straight up rocked. I loved the first set with Yonder Loved Catfish John and Hold What Ya Gotta, The Whole set was solid and had great energy i loved it all from my seats 6th row kang`s side The 2nd set really took off, Best Feeling was the sickest version i`ve seen and the segue into Eye Know Why was solid. The Sand Dollar->Up The Canyon-> Sand Dollar sandwhich left me wondering if i would ever return to planet earth. Then came the Black Market, I don`t know why but this song fuckin rocks. I don`t even really remember the rollover but i loved the encore did anyone else hear the Long Journey Home Teases before the unreal segue into I Saw The Light YEEEEEEEEEEEEEEHA it felt great to be back OTR take care all, DUKE"

"I made the short jaunt to Ct. and was not dissapointed. This was my third incident and my best seats so far (2nd row!)...thanks SCI Ticketing. I am a longtime Deadhead who attended many a show. I thought that I would never find something musically that could come close to filling the void that existed after Jerry`s passing. Well, the Cheese may exceed those good old days with the Dead. For me this night will stay with me for quite awhile. To be that close to the band and witness their skillful powers of improvisation while I made eye contact with them and they with each other was well...priceless. I was familiar with Yonder Mountain and they were alot of fun. When they joined String Cheese, the show rose to a new level which continued for the rest of the evening. The first set had a fair amount of covers that were simply amazing. Mighty Quinn (Bob Dylan is also an old favorite of mine) was the best version that I have heard them do and I have alot of hours of shows commited to disc. Catfish John (another old favorite, this time of JGB) was groovin and I can`t remember the last time SCI did an all electric version of it. The closing search was high energy with Kang and Nershi jumping up and down with all the rest of us. By the way, a not too shabby version of Pack It Up with a full out psychedelic meltdown jam that included some sounds I didn`t think were possible coming out of I believe Kyle`s synth. The second set as other people have stated, felt like one long jam. Sand Dollar was incredible with a sweet Up The Canyon sandwiched in. The Black Market>New Pollution worked well with this set as it continued the heavy synth theme of the night..Kyle was definetly on his game tonight. The Rollover had people in the bathroom after the show shaking there heads with a smile and nothing else to say but ROLLOVER, it was not as extended as other but concise and powerful with Kang going off with the mando. The two song encore just added more to the pleasurable experience as it was my first Little Hands in person and it is one of my favorites..just beautiful. I Saw The Light just confirmed the churchlike experience that I had just witnessed. I bought the download and have listened to it once and the whole wonderful evening just comes rushing back to me...AHHH"

"to say YMSB set the night right would be an understatement...as for SCI, the boys put together an awesome night as fast ass hard rocking bluegrass...they were enthusiastic on stage, extremely sharp, segued from song to song in the 2nd set very well; all of this while each band member showcased thier talents...my best incident...fans, download the show...and boys, please spend more time in New England...thanks for an awesome night!"

"I concur with all the previous reviews. Yonder was really great and totally warmed up the place nicely for a kick-ass Incident! Doces, Molly, Headies, Cabbie, Hocus Pocus"